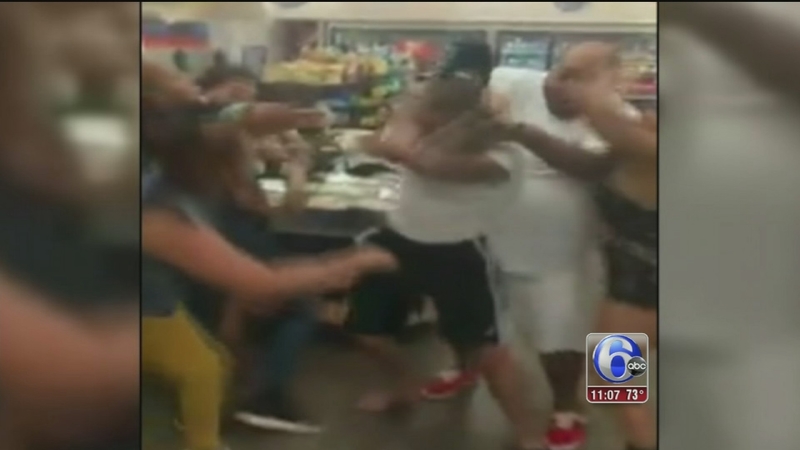 NORTHEAST PHILADELPHIA -- Police are investigating a brawl involving flying food and flying fists at a Northeast Philadelphia Wawa this past weekend.

The late Friday night melee unfolded inside a crowded Wawa on Torresdale Avenue and Levick Street.

Witnesses say the group seen in cell phone video are all family members and that one or two people began screaming at a Wawa employee.

"The customers wanted to beat up a worker," a witness told Action News Monday night. "Another customer came to the worker's defense, and they started fighting him. There was a bunch of them and they're all family related, and they started tearing the Wawa up."

Action News spoke exclusively to the Good Samaritan who ended up in the middle of the brawl.

"They were trying to jump one of the cashiers. They started trashing the store when they couldn't get to her. I went outside. I called the police. When I came back in, he was trashing the store again. I tried to get him to stop and when I tried to stop him, his family or his friends or whoever they are, just tried to jump on top of me and beat the crap out of me," Shawn Nichol said.

It not clear what prompted the ruckus, but police are investigating vandalism in the store and the assault of one of the customers.

The Wawa brawl was captured on cell phone video.

"When you have people that aren't dealing with a clear head, irate for whatever reason, acting in a way that these individuals are acting, they're obviously doing things that don't make sense," Stanford said.

Still it's all Wawa customers in the parking lot were talking about.

"It's crazy, and it's not the first time it's happened," Tia Henry of Torresdale said.

"Personally, I'm glad no one got hit with a bottle or something," William Crozier of Torresdale said.

Wawa officials tell Action News they are cooperating with police.

As for Nichol, he does not regret stepping in.

"I'm happy I did what I did because I protected somebody else and it's the right thing to do. Everybody else was standing there videotaping it and nothing was happening except them destroying the place," Nichol said.