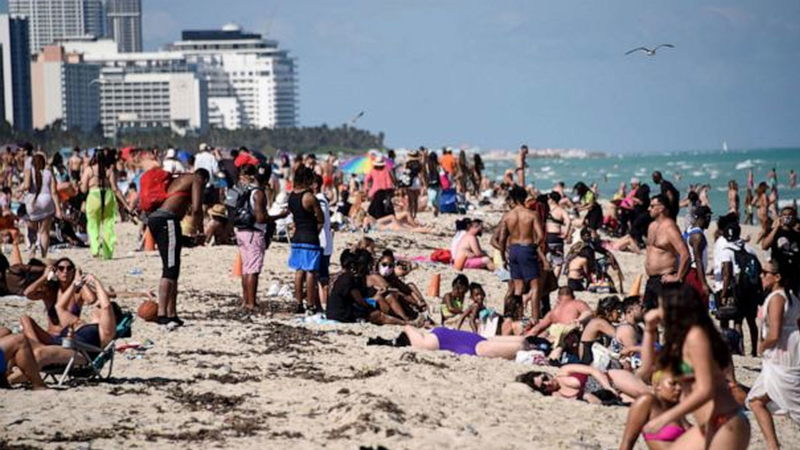 College students are continuing to flock to beaches to celebrate spring break despite the continuation of the COVID-19 pandemic.

Although universities around the country either scaled back the traditional holiday week or canceled it altogether, the Sunshine State saw an influx of traveling students over the weekend.

On Friday night, two Miami Beach Police officers dispersed a large crowd using pepper balls after two officers were injured, the police department tweeted. Authorities reported instances of bottles being thrown at police and a woman riding on top of a car. At one point, a crowd of more than 200 people, some of which were smoking marijuana and drinking from open containers, were blocking traffic, The Associated Press reported, citing police reports.

Earlier this month, Miami Beach City Manager Raul Aguila warned spring breakers to stay out of town, and a message to the cellphones of tourists warning them to "Vacation Responsibly."

"If you want to party without restrictions, then go somewhere else. Go to Vegas," Aguila said during a virtual city meeting.

UC Davis says it will pay students who do not travel for spring break amid the coronavirus.

In Texas, Galveston was also a hot spot for spring breakers, where thousands of people flocked to the beach to soak in the warm weather, ABC Corpus Christi affiliate KIII reported.

Texas Gov. Greg Abbott announced a plan to lift mask mandates and allow businesses to operate at 100% capacity on March 2.

Many people in Galveston chose not to wear the face coverings at the beach, Fort Worth resident Kelly Roberson told KIII.

The Transportation Security Administration screened 1,357,111 passengers on Friday and another 1,223,057 passengers on Saturday, according the the agency.

Spring break travel last year may have fueled the spread of the virus as it gained momentum in March 2020, a study out of Ball State and Vanderbilt University that used GPS smartphone data to track the movement of a sample of more than 7 million U.S. college students found.

Some colleges are getting creative in their attempts to get students to stay in town. The University of California, Davis is offering students $75 to not travel during spring break.