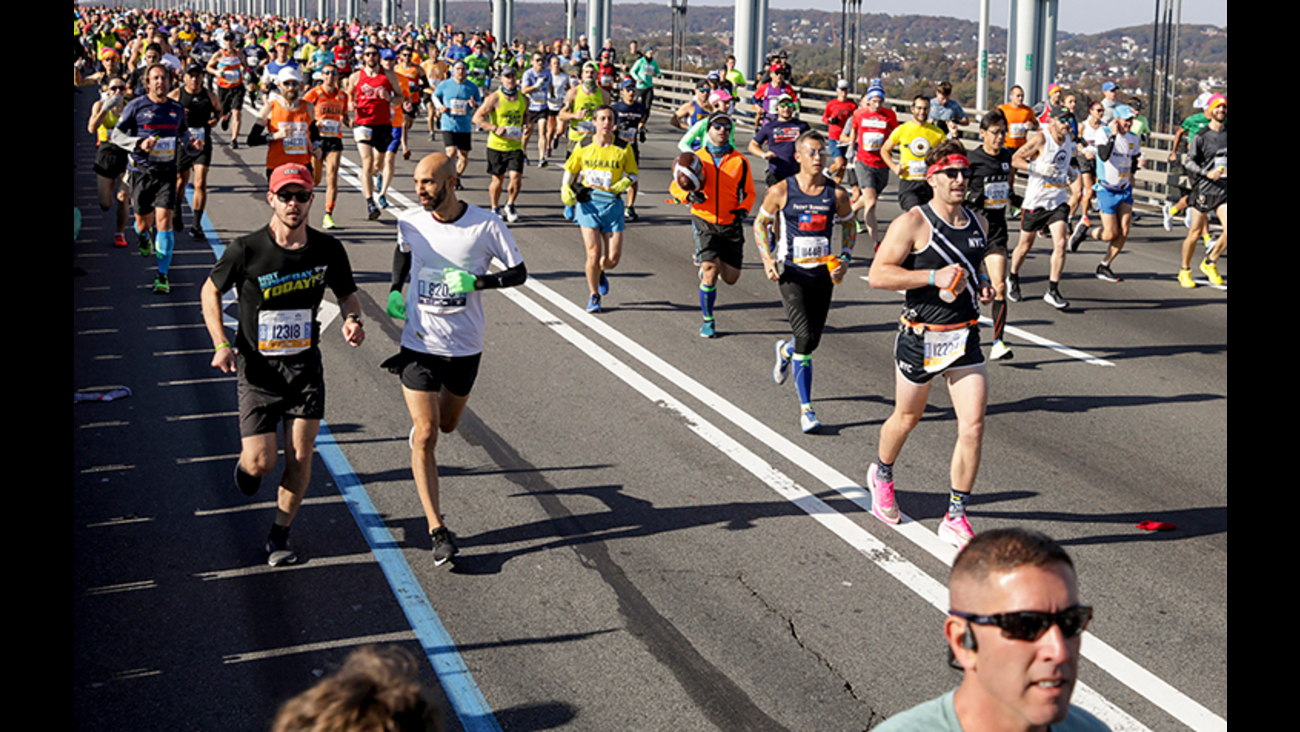 Runners make their way across the Verrazano-Narrows Bridge during the start of the New York City Marathon, Sunday, Nov. 3, 2019, in New York.

NEW YORK CITY (WABC) -- A record-breaking number of applicants have entered to run the 2020 TCS New York City Marathon in the 50th anniversary edition of the most anticipated and iconic annual mass sporting events in New York City and the largest marathon in the world.

Approximately 4,200 runners will be accepted through a drawing on Wednesday.

This year's race, set for Sunday, November 1, will feature the sport's top professional athletes along with runners of all ages and abilities from countries around the globe.

New York Road Runners (NYRR), the world's premier community running organization, has organized the race since it began in 1970 as a four-lap race in Central Park.

"We are extremely proud to celebrate 50 years of this amazing event that's meant so much to so many in New York City and around the world," said Michael Capiraso, president and CEO of New York Road Runners. "This year's TCS New York City Marathon will be extra special for all the runners and supporters who will represent the millions who have helped create one of the most historic sporting events of all time."

Due to the overwhelming popularity of the race, NYRR provides runners with various opportunities to gain entry. Each year thousands of runners earn an entry though a range of methods (Entry methods link). Others apply to gain a spot through the entry drawing, which has been taking place since 1980.

Applications were received during a two-week open registration period from January 30 to February 13, as well as a special application held during the 2019 TCS New York City Marathon. Applicants who were not among the 50 runners selected in the special application were automatically entered into this drawing.

Runners who do not gain entry through the drawing or a guaranteed method can still participate in this celebratory event by running for a charity or registering through an international tour operator.

The TCS New York City Marathon provides an incredible platform for charities to fundraise. The NYRR Official Charity Partner Program raises millions of dollars annually and includes more than 450 nonprofit organizations with the aim to support their missions and services. Participating charities can offer guaranteed entry to runners who fundraise on their behalf. Among the charities, NYRR Team for Kids is the TCS New York City Marathon's largest charity and raises funds for NYRR's free youth running programs.

In honor of the 50th anniversary, the 2020 TCS New York City Marathon will be recognized in a year-long celebration showcasing the marathon's history and the impact it has had on New York City and millions of people around the world. Approximately 53,000 runners are expected to take part in this historic and memorable race.

-- February 26: Drawing takes place, and runners are notified of their entry status

If runners do not receive entry through the drawing, they can still obtain entry to the TCS New York City Marathon in the following ways: