'This shouldn't happen to anyone': Victim in anti-Semitic assault speaks out 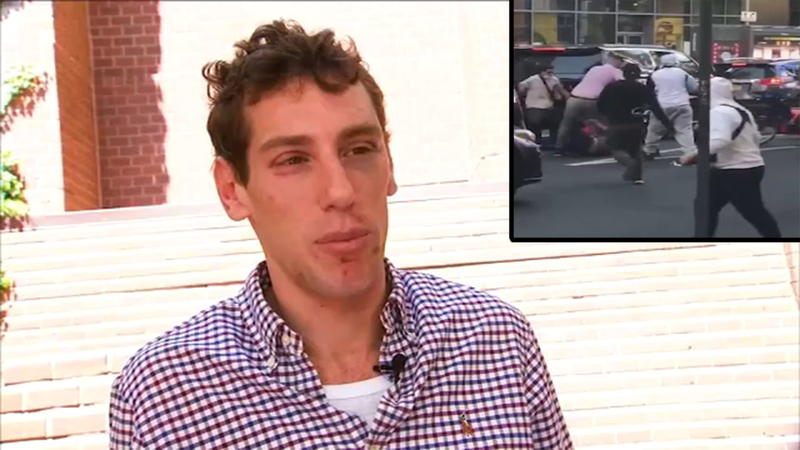 'This shouldn't happen to anyone': Victim in anti-Semitic assault speaks out

MIDTOWN, Manhattan (WABC) -- A 29-year-old Jewish man was attacked in a gang assault in Midtown that is now being investigated as a hate crime, as pro-Israeli and pro-Palestinian protesters clashed in Times Square Thursday night, resulting in more than two dozen arrests.

One person is in custody, and up to six more are being sought.

The victim, Joe Borgen, was wearing a yarmulke and walking to the pro-Israel protest when he was jumped outside 1604 Broadway around 6:30 p.m.

"They were just wailing on my head, beating on me, I'm like, just literally counting for cover," he told Eyewitness News reporter NJ Burkett. "I think that's why my wrist hurts, because I was (protecting myself) and they beat me in the head." 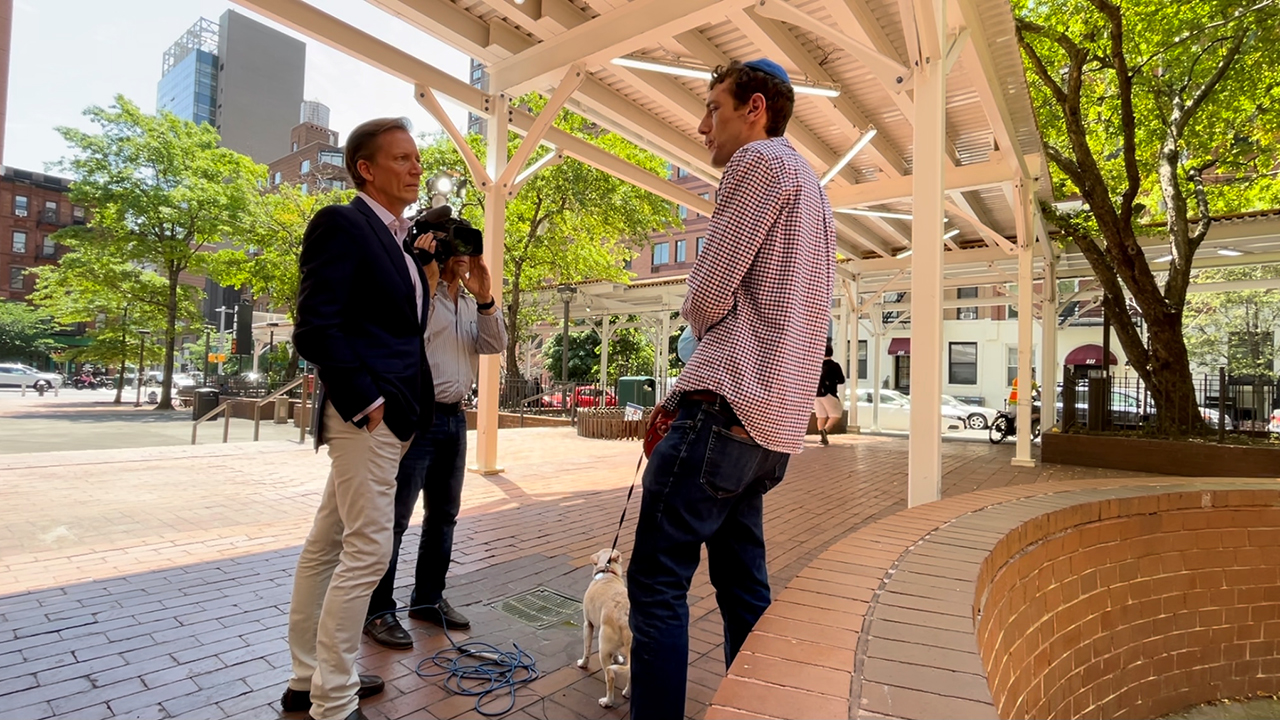 The group punched, kicked, pepper sprayed, and beat him with crutches. Some made anti-Semitic statements including "(expletive) Jews" and "(expletive) Israel."

"This shouldn't happen to anyone, let alone the Jewish, white, Black, whatever skin color, ethnicity you are," Borgen said. "I mean, the hatred that's taking place these days is just mind boggling to me."

Borgen was treated at Bellevue Hospital and released.

"I looked in the mirror this morning, I don't like what I see it in my eyes, messed up," he said. "I mean, there's a lot of general soreness, but I could have been worse. I guess I could have died."

The suspect, 23-year-old Waseem Awawdeh, of Brooklyn, was taken into custody in Greenwich Village. He is charged with assault as a hate crime, gang assault, menacing, aggravated harassment as a hate crime and criminal possession of a weapon.

Awawdeh has an extensive criminal record including an arrest for assaulting officers last November, criminal possession of a weapon in December and several arrests for driving violations.

"I was actually at a rally at the same place last week, no problem whatsoever, same exact process, everything was great, a couple incidents here and there, but nothing like what happened yesterday," Borgen said. "Before I got there, I see someone chasing me. I reacted, turn around, I'm surrounded by like 10-15 people at that point. I was just bracing for impact and just in survival mode trying to make it through."

He also spoke of fear among his friends, including those of Asian descent.

"I have coworkers of Asian descent in this city, and they're afraid to go on the subway at night because they're afraid they're going to get attack," he said. "Forget me for a second, that shouldn't happen to anyone in New York City. I've been blown away. It's just shocking to me."

"We had a man viciously beaten, simply because he appeared to some individuals to be Jewish," de Blasio said. "We found with the horrible actions and violence against Asian Americans that New Yorkers stepped up, provided information, helped us arrest people. We need your help to stop these anti-Semitic attacks immediately...what happened last night is absolutely unacceptable. There is no place for anti-Semitism in New York City. We will not tolerate it."

"I unequivocally condemn these brutal attacks on visibly Jewish New Yorkers and we will not tolerate anti-Semitic violent gang harassment and intimidation," Cuomo said. "New York is the vibrant and dynamic home for people from around the world. This tapestry makes New York the extraordinary place that it is. Those of all faiths, backgrounds and ethnicities must be able to walk the streets safely and free from harassment and violence. Justice needs to be done, and I am directing the New York State Police Hate Crimes Task Force to offer their assistance in the investigation of these attacks."

In a separate incident, two commercial fireworks were thrown from a car near Midtown.

Cops say the large firework was tossed at pro-Israel demonstrators.

Police released a photo of the Friday night of the suspect who threw the explosive device while riding the back of a pickup truck. 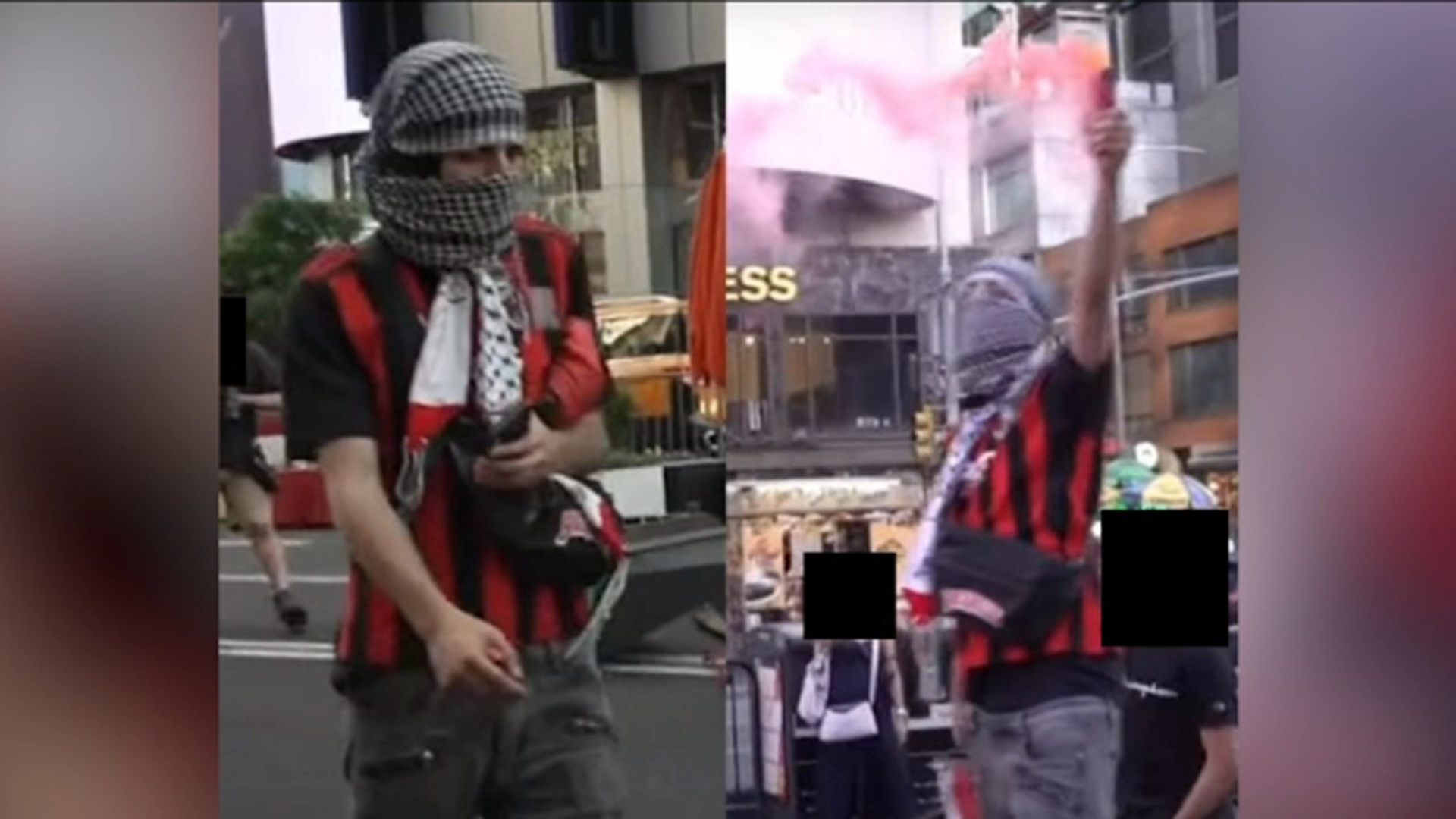 A 55-year-old woman suffered a minor burn in the incident, and an arson investigation is being led by Midtown North.

A total of 26 people were arrested, with charges including unlawful assembly, obstructing government assembly, disorderly conduct, and criminal possession of a weapon.

The protests erupted as Israel and Hamas announced a cease-fire Thursday, ending a bruising 11-day war that caused widespread destruction in the Gaza Strip and brought life in much of Israel to a standstill.
EMBED More News Videos