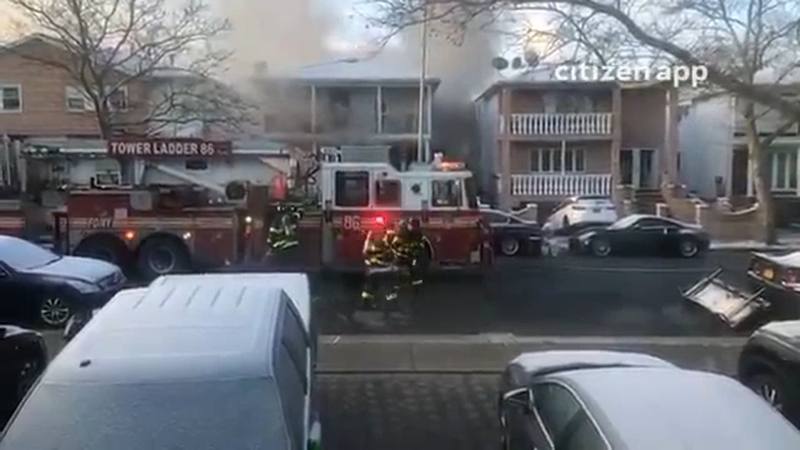 GRANITEVILLE, Staten Island (WABC) -- One woman died and 10 others were injured in a house fire on Staten Island Thursday morning.

The blaze broke out just before 7 a.m. at a house on the 100 block of Spartan Avenue in the Graniteville section.

Video from Citizen App showed heavy smoke coming from a two-story home, which suffered damage to all three floors of the multi-family structure.

"There were three men, and they were really frantic and they were trying to open all the doors," neighbor Rachael Hernandez said. "And there was a lot of smoke, but we didn't see any fire."

A 55-year-old woman was found in the basement and was pronounced dead at the scene.

"We had one DOA inside the basement apartment, she was found by the first arriving engine," FDNY Deputy Chief Brian Gorman said. "We had extension to the second floor, and the first floor as well. Heavy fire condition, we are up to 10 injured, two civilians and eight minor injuries to firefighters."

The victim's 23-year-old nephew was treated for smoke inhalation at Richmond University Medical Center, while another person was treated at the scene.

Eyewitness News has learned that the woman and her nephew appeared to have been in some sort of a dispute prior to the fire, but at this point, the fire has not been ruled suspicious.

"I didn't know them at all, but I would see them come and go," neighbor Ariel Nuesi said. "They were very peaceful people."