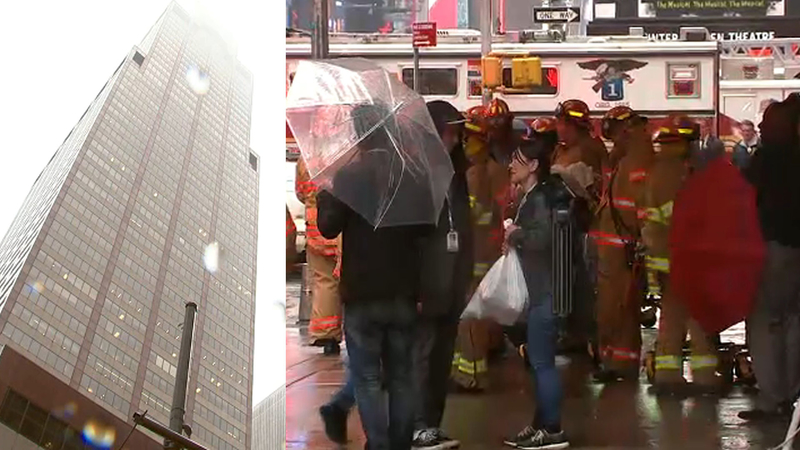 MIDTOWN, Manhattan (WABC) -- A pilot was killed in a helicopter crash-landing on a building in Midtown Manhattan on Monday afternoon, officials said.

The incident was reported at the AXA Equitable Center in the 700 block of 7th Avenue near 51st Street around 2 p.m.

The FDNY said the chopper crash-landed onto the building which resulted in a fire on the roof.

Images from the scene of today’s helicopter crash at 787 7th Ave. in Manhattan. #FDNY members remain on scene. There is one fatality reported. pic.twitter.com/7qyyJWrMsw

A senior FAA official told ABC News this is believed to be an accident and the helicopter lost contact with the LGA tower. Preliminary information from law enforcement sources is the helicopter was in trouble and tried to land at the nearest flat spot.
EMBED More News Videos

Sandra Bookman and CeFaan Kim share the latest from eyewitnesses from the scene of the crash.

Gov. Andrew Cuomo responded to the scene and said there is no indication of terrorism.

The pilot has been identified as Tim McCormack who was described as a "highly experienced" pilot by the manager of the Linden airport.

He had taken off from 34th Street Helipad around 1:32 p.m. en route to Linden, New Jersey. The privately owned helicopter crashed-landed a few minutes later.

Jim Hoffer has the latest on the investigation into the deadly helicopter crash.

No one inside the building was injured.

Thousands of office workers streamed down fire stairs as first responders rushed to the roof.

Department of Buildings inspectors and engineers found no evidence of structural damage, and determined that the building does not pose a danger to the public.

The DOB said the building is currently safe to occupy, and no vacate orders were issued.

Video showed a helicopter flying erratically over the East River. It was taken around the same time as the crash, but authorities have not been able to confirm that it is the helicopter involved.
EMBED More News Videos

The FAA released the following statement:

"An Agusta A109E helicopter crashed on the roof of 787 Seventh Ave. in New York at around 1:45 p.m. today. Preliminary information is that only the pilot was aboard. FAA air traffic controllers did not handle the flight. The NTSB will be in charge of the investigation and will determine probable cause of the accident. We will release the aircraft registration after NYC officials will release the pilot's name."

President Trump called Cuomo to offer assistance and tweeted about the incident:

I have been briefed on the helicopter crash in New York City. Phenomenal job by our GREAT First Responders who are currently on the scene. THANK YOU for all you do 24/7/365! The Trump Administration stands ready should you need anything at all.

Pedestrian and vehicular traffic was temporarily shut down from 42nd to 57th streets between 6th and 8th avenues due to debris and a fuel leak.

At the time of the incident, Newark airport and LaGuardia airport were both at a ground-stop due to poor visibility and thunderstorms, according to the FAA.
EMBED More News Videos

Eyewitness Nathan Hutton tells Sandra Bookman he was working on the 29th floor when the helicopter hit the building.

The FAA says McCormack never communicated with controllers and was flying a visual flight plan.

The helicopter was registered to American Continental Properties Inc., which released the following statement:
"We are mourning the loss of Tim McCormack who has flown for us for the past five years. Our hearts are with his family and friends."

Newscopter7 reporter Shannon Sohn, who was grounded Monday because of the weather, said she looked at the pilot's flight path.

"He was all over the place really indicating that it looked like he was lost because what he should've done was taken off and headed directly down the East River coming back towards Linden and that's not at all what he took," she said. "When you look at the pattern that he took he was almost doing figure eights and we saw a video of him coming up really high and dropping down really low. It indicated that he seemed very disoriented during the flight."

Rep. Carolyn Maloney of New York called on the Federal Aviation Administration to ban "non-essential" helicopter flights over Manhattan following the crash, and vowed to hold the agency "accountable" for what happened.