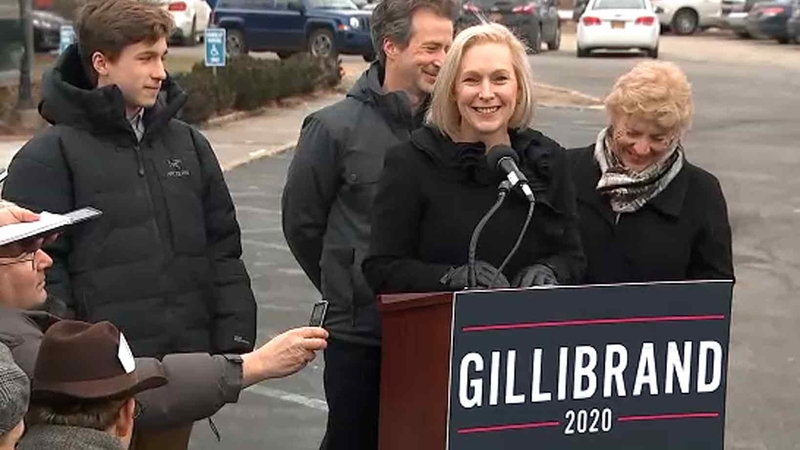 TROY, New York (WABC) -- Sen. Kirsten Gillibrand has entered the growing field of 2020 Democratic presidential contenders, telling reporters outside a diner in Troy, New York, Wednesday morning, "I'm running for President of the United States because as a young mom I will fight for your children as hard as I would fight for my own."

Gillibrand's comments came after her announcement on national television Tuesday night that she is launching an exploratory committee.

"It's an important first step, and it's one I am taking because I am going to run," the New York senator said on "The Late Show with Stephen Colbert." She listed a series of issues she'd tackle as president, including better health care for families, stronger public schools and more accessible job training.

Kirsten Gillibrand: What to know about 2020 candidate, New York senator

She is already catching heat from Republicans, because fewer than 90 days ago, she appeared on Channel 7 and said she would not run. During a debate in October 2018 airing on WABC, Bill Ritter asked Sen. Gillibrand if she would serve her full six-year term if re-elected, and she promised she would.

Gillibrand, 52, has already made plans to campaign in Iowa over the weekend, more than a year before the leadoff caucus state votes.

She joins what is expected to be a crowded primary field for the Democratic nomination that could feature more than a dozen candidates. Already, Massachusetts Sen. Elizabeth Warren has announced her own exploratory efforts, and decisions by a number of other senators are expected in the coming weeks.

Gillibrand, who was appointed to the Senate in 2009 to fill the seat vacated by Hillary Clinton, has been among the Senate's most vocal members on issues like sexual harassment, military sexual assault, equal pay for women and family leave, issues that could be central to her presidential campaign.

"I'm going to fight for other people's kids as hard as I would fight for my own," said Gillibrand, a mother of two sons, ages 10 and 15.
EMBED More News Videos

Derick Waller reports from outside the senator's office.

As she works to distinguish herself from likely rivals, Gillibrand will be able to draw from the more than $10.5 million left over from the 2018 re-election campaign that she can use toward a presidential run.

Gillibrand pledged during her Senate campaign that she would serve out her six-year term if re-elected.

She will use Troy, New York, where she lives, as a home base for her presidential efforts.

Near the end of their interview, Colbert presented Gillibrand with a basket of campaign gifts, including an ear of yellow corn to wave in Iowa, a piece of granite for New Hampshire and a one-of-a-kind button that reads "I announced on the Late Show with Stephen Colbert."