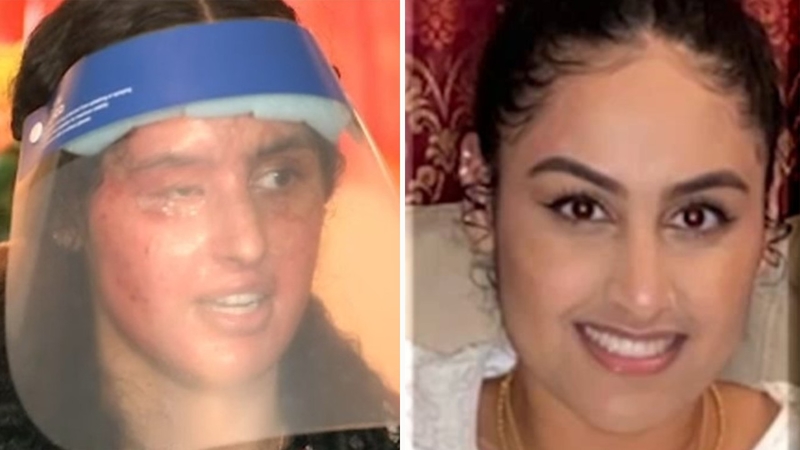 ELMONT, New York (WABC) -- A college student doused with a hazardous substance is speaking out about the horrifying attack as she recovers and tries to understand why she was targeted.

When you look at Nafiah Ikram most will see a victim. But the 21-year-college student is a survivor.

"Like my face was fully on fire, and then I couldn't breathe too," Ikram said. "This was a worse than death experience. I was in that ambulance and I felt my chest being ripped out of my soul. That's how much pain I was in."

She was coming home from work on March 17 when a man ran up from behind her, and without saying a word, threw the chemical in her face.

For weeks she couldn't eat or talk. But now she's speaking out.

She looks nothing like she used to, but she's not hiding.

For weeks they thought she'd be blind, but now there has been some improvement.

"It's still very cloudy and hazy. I cant read out of my eye. I can't, like if I close my eye, I can see there's a light there, I can see what you're wearing but I can't see you," Ikram said. "I can see my hand but I can't tell how many numbers there are."

She thinks she was targeted but the question is why.

"That's what I ask myself every single day. It just doesn't make sense. Like I would like to think I'm a very outgoing and friendly person," Ikram said. "I keep thinking, what could I have possibly said or done to someone for them to want to hurt me this much?"

Ikram says that night she noticed the man standing on the corner when she got to her home on Arlington Avenue in Elmont.

It didn't feel right, so she tried to get inside. That's when he attacked her.

Cops say he was wearing gloves and was carrying a white cup. He is about 6 foot 2, with a skinny build and was wearing a black hooded sweatshirt.

The hazardous substance melted through Ikram's jacket and burned her arms. Investigators are still trying to determine what exactly it was, but they told Ikram's family it appeared to be some sort of acid.

"It's just a test and it's temporary, and God wouldn't have done this to me if he didn't think I couldn't handle it," Ikram said.

Ikram is a pre-med student at Hofstra University and is studying to become an obstetrician or a pediatrician. But now she says she may consider wanting to help burn victims.

"I'm sure the person - the assailant - was not acting alone or at least did not tell somebody about this act. I am telling you to come forward. We will, we will catch him," Ryder said. "The injuries to this young lady are horrific."

Nassau County Executive Laura Curran said the attack is under investigation by the police department. She said what happened is "unacceptable and we are committed to getting to the bottom of it."

Anyone with information is asked to call the police at (1-800-244-TIPS) or online - all tips will remain anonymous.

A GoFundMe page to help Ikram pay for her current and future medical expenses has already raised more than $365,000.