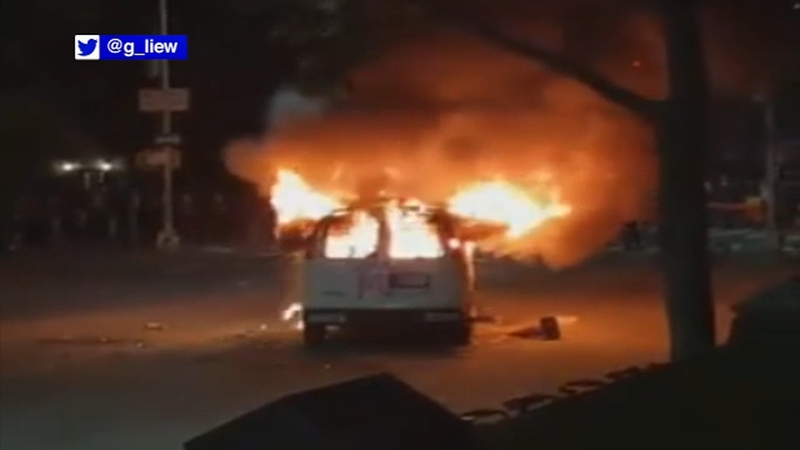 NEW YORK (WABC) -- One of two sisters from the Catskills allegedly involved in a Molotov cocktail attack on cops is facing federal charges, along with two other people in a separate but similar incident during the Brooklyn protests Friday night, a law-enforcement source told Eyewitness News

In the incident involving the sisters, police said the Molotov cocktail was thrown at the NYPD van around 11:30 p.m. near the intersection of Eastern Parkway and Washington Avenue, outside the Brooklyn Museum, as violent protests convulsed parts of the borough.

"It is by the grace of God... that we don't have dead officers today," New York City Police Commissioner Dermot Shea said at a news briefing Saturday morning.

Samantha Shader, 27, was charged with four counts of attempted murder as well as attempted arson, assault, reckless endangerment and criminal possession of a weapon. She is now facing federal charges from U.S. Attorney's Office for the Eastern District of New York, the law-enforcement source said.

Her sister, Darian Shader, 21, was charged with resisting arrest and obstruction of justice. She is expected to be prosecuted by the Brooklyn District Attorney.

The pair remain in police custody.

Federal charges are expecting to come against people involved in Friday's Molotov cocktail incidents during the Brooklyn protests, including the attack involving the sisters, the NYPD said. The matter would be handled by the U.S. Attorney's Office for the Eastern District of New York, a law-enforcement source told Eyewitness News.

"We will not tolerate actions like these against New York City Police Officers," the NYPD said in a tweet.

The van attack was among several acts of violence in Brooklyn that left officers injured and police cars damaged.

"Coming to an assembly premeditated with loaded firearms, with bricks, with Molotov cocktails, is the furthest thing possible from civil disobedience," Shea said.
The police response to Friday's protest also came under fire for itself being rough after a video surfaced showing an officer throwing a peaceful protester to the ground.

Shea said the NYPD takes pride in its training and allowing people to march for what they believe in.

Shea said in one instance, an officer had their teeth knocked out.