KGO
By by Jennifer Olney and Reggie Aqui 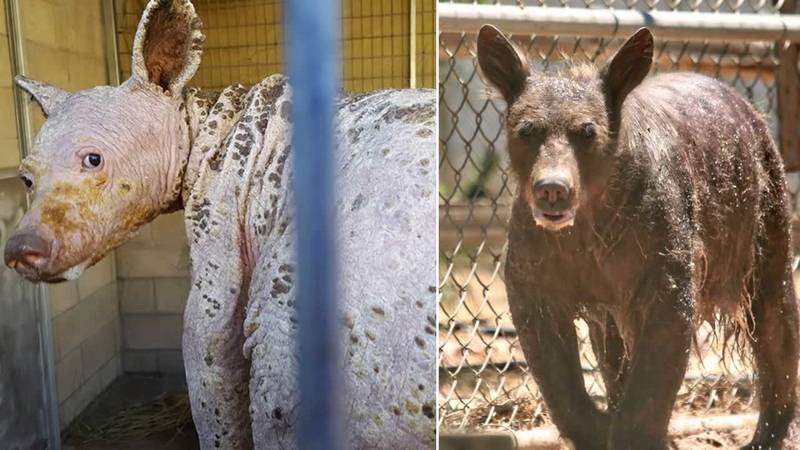 SAN DIEGO, California -- When Eve was found six months ago, she was in such bad shape that it was hard to even tell she was a bear.

Now, six months later, thanks to expert care and volunteers all over California, she is well on the way to recovery.

Eve was found just before Christmas in a trash bin in Butte County, and she had lost all of her fur because of mange.

First, she underwent emergency medical care at the Bear League in Lake Tahoe. Then volunteers from the California Fish and Wildlife department drove the bear to San Diego County to be cared for by The Fund for Animals Wildlife Center, an affiliate of the Humane Society of the United States.

She arrived at the center on Christmas Eve, which is why volunteers named her Eve. Matt Anderson, director of the wildlife center, said the team had treated bears with mange before, but never this severe.

Eve needed months of intensive treatment, including medicated baths and careful removal of dead crusty skin. The veterinary team says she is now mange-free, though they are still treating her for a skin infection as her fur coat starts to grow in.

According to Anderson, Eve is also demonstrating appropriate behavior for a bear.

"She's climbing trees regularly," he said. "She's exploring her enclosure. She's also playing in the pond that we have given her."

A big surprise is Eve's age. She was so small when she arrived at the wildlife center, the vets estimated she was only about a year old. But a later dental exam showed she is really 3 or 4 years old and was likely small because she was sick.

The goal is to release Eve back into the wild, but the team is still assessing when and if that can happen.

Caring for Eve is expensive. If you would like to help her or other wildlife in trouble, click here.