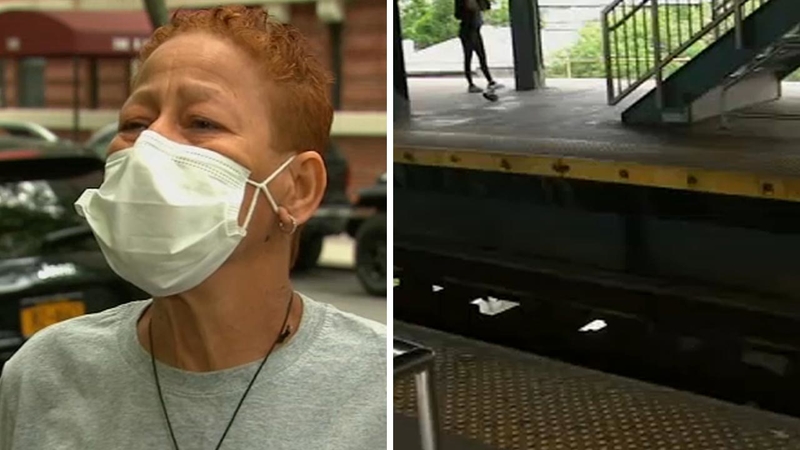 NYC woman speaks out after being shoved onto subway tracks

BROADWAY JUNCTION, Brooklyn (WABC) -- A woman who was pushed onto the tracks at a subway station in Brooklyn is speaking out about the horrifying experience.

"I was scared," victim Maria Brown said. "I was in shock, I was screaming."

Brown told Eyewitness News she wondered what would've happened if she was alone and if there was nobody to help.

"I would have been dead today, yes," she said.

The 63-year-old was taking the J train at Broadway Junction last Tuesday afternoon to visit her niece when suddenly a man put his hands on her shoulders and shoved her onto the tracks.

In an instant, she could see the lights of the oncoming train -- still several stops away.

When asked if she tried to climb up, she said that she did, "but I couldn't do it."

"I was in shock, I was screaming," Brown said.

She says two riders grabbed her arms and pulled her back to the platform.

Brown says the suspect didn't say anything to her.

"He just pushed me, and that was it," she said.

Most of the suspects are homeless and emotionally-disturbed. Some of them have long and recent criminal histories.

"How is this guy back out in the streets," resident Tommy Holliday questioned. "He could have killed that lady yesterday."

The NYPD has added hundreds of officers to patrol the system and the MTA has tightened its web of surveillance cameras -- now covering 70% of the system.


"We do feel that in order to get New York City back up and running again, we have to deliver a system that the people who are using it feel safe and secure in," MTA Chief Safety Officer Patrick Warren said.

However, Brown says it will take more than that for her to return to the subway. The gash on her leg took forty stitches to close.

She says she wants to know why he did it.

"That's what I want to know, why," Brown said. "I was just minding my business, walking. Now I'm scared, I ain't taking no more trains."