7 On Your Side: Is your cellphone spying on you? 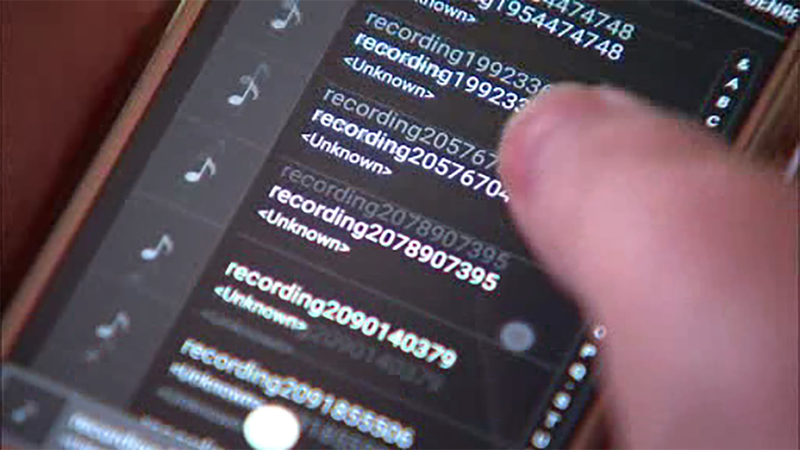 Is your cell phone spying on you?

NEW YORK (WABC) -- Smartphones are an indispensable part of our lives, and for many, the devices are the first thing they reach for when they wake up and the last thing they see before going to bed. But you may be surprised to know how much your smartphone knows about you.

A recent survey showed the average smartphone owner uses more than 10 apps each day, up 25 percent year to year. And one expert said some of these apps allow access to your phone's camera or microphone without you knowing it.

Jimmy Spano said his own phone randomly recorded hundreds of moments over the last two years, private moments between a husband and wife. The conversations include room noise at restaurants, and yes, even in the bathroom.

The recording, he said, were made without their knowledge and discovered by accident, in the music folder as "unknown files."

"I don't know who else heard this," he said. "I have no clue what they're doing with it."

But cyber security experts like Gary Miliefsky said it's not all that uncommon.

"You'd be really surprised," he said. "Most of your apps are using everything to collect data on you."

Data is gold for marketing and advertising purposes, which is why many apps ask for access to your contacts, email, texts, photos, microphone and camera. But according to Miliefsky, CEO of Snoopwall, some apps may not seek permission first.

"If this app is spying on you, looking at your microphone and your webcam, if you want to, you can uninstall it," he said.

Miliefsky suggests spring cleaning for your smartphone. On both the iPhone and Android, you can easily see which apps have access to what in your privacy settings. Kill the apps you're not using. Spano had dozens of apps loaded on his phone with the microphone access switched on.

For apps you want to keep or apps that come on your phone that can't be uninstalled, toggle the microphone off if you don't need it for voice commands. That way, it can't record.

Malware can also introduce secret third-party recording on your phone. Miliefsky said it's possible Spano and his wife's phones were infected with a spying virus. Avoid this by not clicking on unknown email links and not trusting suspicious texts.

"Consumers need to be really intelligent about what apps they put on their phone and what apps they put on their kids phones," Miliefsky said.
He recommends looking for apps that don't allow too many permissions, and read each app's privacy policy carefully. You'll see everything you're giving permission to access in the fine print. The carrier, Verizon, and the phone maker, Samsung, both said neither the phone nor the service make unauthorized recordings of their customers, but both are investigating to determine what led to the tapings.

"Samsung takes privacy very seriously. We do not record conversations. Apps on mobile phones provide users with the ability to activate the microphone on their device based on their preferences. We have reached out to Mr. Spano to learn more about his and his wife's experience and to understand which third-party apps the Spanos allowed access to the microphone on their phones."

Verizon corporate statement:
"We take customer privacy seriously and are working to determine the cause of this issue. At this time, we have concluded the issue is not with Verizon's security or networks. We reached out to the customer to address his concerns and assist with managing his mobile applications."

Send us your questions, issues, and story ideas to by filling out the form above, by emailing 7OnYourSideNina@abc.com, or contact Nina on her Facebook page or tweet her at Twitter @7OnYourSideNY! You can also call the 7 On Your Side Hotline at 917-260-7697.
Related topics:
technologyandroidtechnologyiphone7 on your sidesmartphones
Copyright © 2021 WABC-TV. All Rights Reserved.
7 ON YOUR SIDE
Evictions threatened over Halloween decorations in NJ town
NJ storage customers fighting to get items from Ida-flooded units
Warning: Don't fall for scam involving bank/Zelle cash transfer
NJ storage customers will be allowed in their Ida-flooded units
TOP STORIES
AccuWeather LIVE | Nor'easter slams area with heavy rain, wind
Tri-state region prepares for heavy rain, high winds from Nor'easter
Mass transit prepares for heavy rain, high winds from Nor'easter
School Closings
Find out which schools are closed in your district.
Laundrie family says they will not hold funeral for Brian
Man shot during attempted robbery on subway train in Manhattan
2 killed and 4 injured in Idaho mall shooting
Show More
Albany man arrested after woman found stabbed to death on LI
NYC workers march across Brooklyn Bridge in protest of vax mandate
NYC deli goes viral over crazy sandwich concoctions
Athletes, activists help those struggling with food insecurity
Chinatown mall that once employed thousands at risk of shutting down
More TOP STORIES News