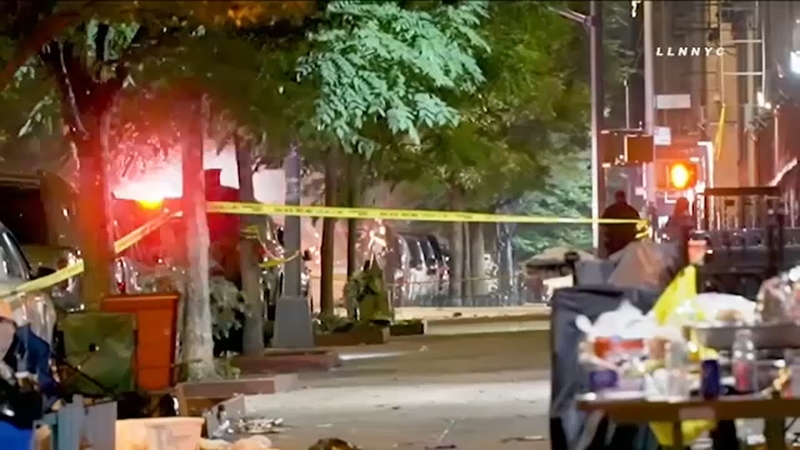 NEW YORK (WABC) -- In the last week, the number of people shot in New York City was up roughly 206% compared to last year, according to the New York City Police Department.

The reported increase in violence marked the fifth straight week in which more people were shot this year than the year before.

Monday the New York City Police Department announced a significant increase in the number of people shot over the last week compared to the same time period.

Other major cities around the country such as Chicago, Milwaukee, Philadelphia and Los Angeles, are also reporting increases in gun violence and crime analysts say there are multiple reasons why.

"The first thing is its summer time. We traditionally see about a 30% increase in shootings in June, July and August," said Christopher Herrmann, a crime analyst and professor at John Jay College of Criminal Justice. "The second thing is the COVID-19 shutdown. The shutdown is ending and we are seeing more people out on the street, and then the third thing is there is a lot of anti-police protesting and rhetoric."

Herrmann said it's important to recognize these shootings aren't random.

"They are targeted," Herrman said. "You should think of it in the context of people want to settle scores and now that everyone is reopening these shooters and these targets interact with one another."

In mid-June, NYPD Chief of Detective Rodney Harrison expressed a similar view, indicating a large portion of the shootings were tied to gang violence.

"A lot of these crews are beefing with one another and it's resulting in gang violence," Harrison said.

Defense Attorney and bail reformer supporter Steven Epstein of Barket, Epstein, Kearon, Aldea & LoTurco, LLP, pushed back on Monahan's assertion that bail reform is contributing to the increase in shootings.

"I think its offensive, and it's racially based coded language," Epstein said. "Bail reform has nothing to do with the people who get arrested and charged with those types of serious offenses such as homicide. Those people would still be subject to remand or significant cash bail. Bail reform has to do with misdemeanor and non-violent offenses."

Mayor Bill de Blasio also pointed to a court system that he said isn't working during his Monday press conference.

A spokesperson for the New York Court Administration pushed back.

"New York City Criminal Court has continually functioned, albeit virtually, throughout this pandemic. Arraignments and preliminary hearings have been conducted on an ongoing basis. Every incarcerated defendant has had a preliminary hearing or had an extension granted," wrote Courts spokesperson Lucian Chalfen. "Defendants not in jail, out on their own recognizance, will have court dates scheduled for them to appear in person as we continue to resume in-person operations in New York City Courthouses. Should they fail to appear, a warrant can be issued."

However, Epstein, who has had several cases postponed, disagreed with the courts. He said jury trials in particular have been on hold and the city is continuing to amass a larger and larger backlog of cases.

"In essence, most things are delayed and held up, the cases that did exist are going to continue to back up the system and now that people are out new cases are going to build so we are going to see a complete overloading of the criminal justice system.

Epstein said the state as a whole needs to move toward a more active criminal justice system faster than it currently is and work to find a solution to the issue of jury trials during the ongoing pandemic.

Herrmann also indicated the increase in shootings has followed an uptick in gun sales this year.

The 7 On Your Side Investigates data team has been tracking FBI background checks for gun sales over the past five months in New York State.

We found background checks between February and June were up about 36% compared to last year.

Instagram: @DanielleLeighNews
Report a correction or typo
Related topics:
new york citycrimegang violencenypd7 on your side investigationgun violenceviolence
Copyright © 2021 WABC-TV. All Rights Reserved.
7 ON YOUR SIDE INVESTIGATION