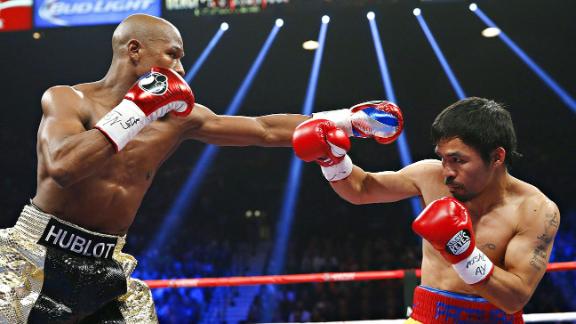 Floyd Mayweather will earn almost as much for 36 minutes in the ring in May asTim Duncanhas made in his 18-year career with the San Antonio Spurs ($235 million).

A source with knowledge of the pay-per-view numbers, which still are not final but have been reported on to a point where a number can be called, told ESPN.com that Mayweather's total for the May 2 fight against Manny Pacquiao will add up to between $220 million and $230 million. Based on the agreed-upon 60-40 split, Pacquiao could wind up earning a little north of $150 million, which would be roughly equivalent to the on-court career earnings ofLeBron James.

Pacquiao's net take will be significantly reduced after paying off his promoter, Bob Arum and Top Rank, a fee that Mayweather doesn't have since he owns his own company.

The fight, which generated close to $600 million in revenue, is the most lucrative boxing bout of all time.

In his 14 pay-per-view fights, Mayweather has now generated more than $1.3 billion, a record.

The fight will go down as the fighters' biggest paydays ever. Mayweather took home at least $40 million each in his two fights against Marcos Maidana and north of $100 million for his fight against Canelo Alvarez.

Mayweather Promotions CEO Leonard Ellerbe did not respond to messages seeking comment, while a Top Rank official said its top executive, Bob Arum, was not available.

Last month, Mayweather told boxing website BoxingScene.com that he thought he would make $275 million from the fight, in which he won in a unanimous decision.