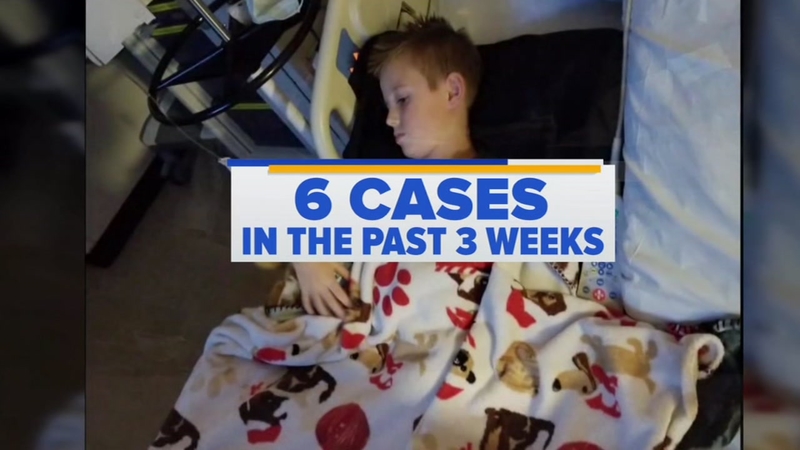 AUSTIN, Texas -- A spike in a mysterious and rare disorder that causes polio-like symptoms, even paralysis, has been confirmed in Texas.

Officials in the Lone Star State say they have seen eight confirmed or probable cases of acute flaccid myelitis this year.

Doctors and parents are on alert because the illness can show symptoms similar to the common cold.

On Tuesday, officials in Minnesota said they have seen six cases. They typically see zero to one cases of AFM per year, on average.

ABC News has learned nine cases were diagnosed recently in Illinois, five cases in Washington state, and a single case was confirmed in Wisconsin.

His 7-year-old son Quinton was diagnosed with acute flaccid myelitis, or AFM.

"We thought it was a dead arm. Like he was laying on it so we didn't think much of it at first. But a couple hours into not being able to move his arm, we got concerned," Hil said.

"It starts off with a cold, cough, runny nose, congestion, and before you know it, you have weakness and paralysis of your arms and your legs," said Dr. Janette Nesheiwat.

We don't know what causes this, we suspect that it could be caused from a virus," said Dr. Nesheiwat.

Experts said the cause for the recent uptick is unclear. While there is currently no cure for AFM, Quinton's dad is confident his son can beat the odds.

"A small percentage of kids report that they're able to get function back so we're just hoping for the best, and we know that Quinton is super resilient and if anyone's gonna get it back, we firmly believe that he will," Hil said.