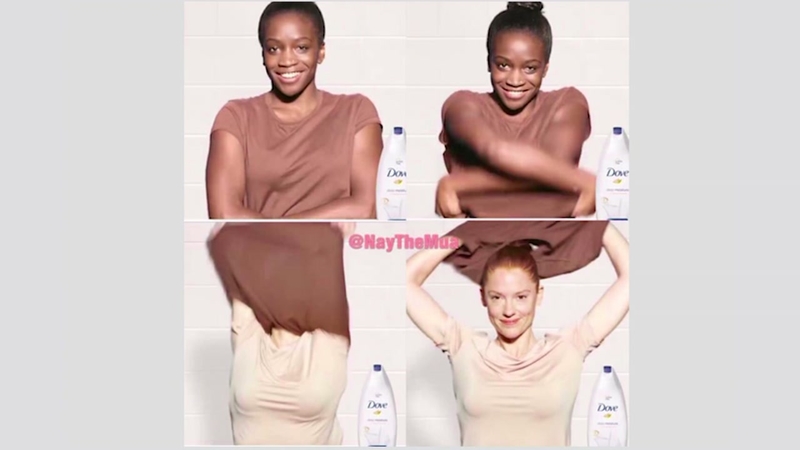 NEW YORK -- Dove is facing heat for a body wash ad showing a black woman taking off her shirt to reveal a white woman, with many social media users calling it racist.

Dove has removed the post from its Facebook page and posted comments on social media Saturday saying it "missed the mark in representing women of color thoughtfully." In an emailed statement Sunday, Dove said the ad, a three-second video clip, "did not represent the diversity of real beauty which is something Dove is passionate about and is core to our beliefs, and it should not have happened ... we apologize deeply and sincerely for the offense that it has caused."

An image we recently posted on Facebook missed the mark in representing women of color thoughtfully. We deeply regret the offense it caused.

The ad was a gif showing a black woman taking off her brown shirt to reveal a white woman, who then took off her lighter-colored shirt, revealing a woman of color in a slightly darker shirt.

While that post has been taken down, there are screenshots from the ad circulating broadly online. One is a group of four images from the ad that show only the black woman turning into the white woman.

Social media users said there were racist implications of a soap ad that showed a black woman transforming into a white woman. Many who criticized the imagery said it suggests black skin is dirty and white skin is clean, and noted there is a historical legacy of racism in soap ads.

"Dove's marketing team is fundamentally racist. A clean body is not a white body. Black bodies aren't systematically dirty," wrote Abigail Sewell, 34, a sociology professor at Emory University in Atlanta, on Facebook. "I've used their products forever, but it's time to move on."

It's not the first time Dove has been criticized for being racially insensitive in an ad. A 2011 ad that showed two women of color and a white woman standing in front of "before" and "after" signs was also criticized .