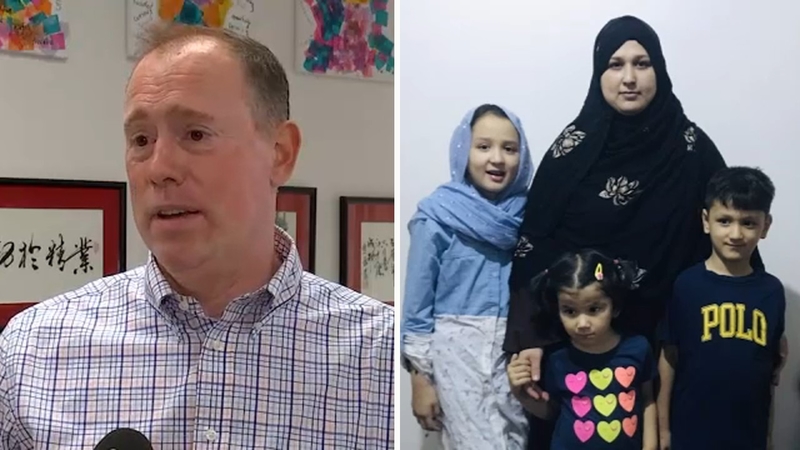 CT principal helps student and her family escape from Kabul

BRIDGEPORT, Connecticut (WABC) -- A family from Connecticut fled Kabul in the final hours before the U.S. military pulled out, and their escape started with help from an elementary school teacher.

Principal Brett Gustafson said he doesn't know where the family is now, but only that they got out in the nick of time.

While there are over 500 students at the Curiale School in Bridgeport, one of Gustafson's favorite students, a fourth-grade girl, traveled overseas with her mother and siblings this summer.

They are not being identified because their father is a potential Taliban target.

"The mother said that they were going to go visit family in Afghanistan in June, I was like 'OK be careful,' not knowing everything that was going to unfold afterwards," Gustafson said.

Last Wednesday, Gustafson got an email from the mother saying her two school-aged children would miss the start of classes because they were stuck in Kabul - not far from the airport where tens of thousands of Afghans were trying to flee.

Gustafson replied and asked if they needed any help.

"I can contact these people, does the American consulate know where you are, you know, what can I do on my end," he said.

He posted to social media, reached out to senators and filled out necessary paperwork, but diplomatic efforts stopped after the bombing that killed 13 service members.

Then came a mysterious email with a phone number and just two words: call me.

A group of US veterans called Afghan Allies worked with Army rangers to begin the extraction process.

After several nerve-wracking hours, Gustafson finally got word that the family had been flown out of the country.

"I was jumping up and down because it had been a while because they had to go to a safehouse because the airport was too dangerous, so I was just very nervous not hearing anything," Gustafson said.

The principal is downplaying his role and crediting the veterans who assisted the military during the evacuations.

He still worries because he hasn't gotten an update.

"We don't know if they're in Germany or Saudi Arabia or Italy or any of the other Air Force bases that are taking Afghanistan refugees, so we'll hope to get that email soon," Gustafson said.