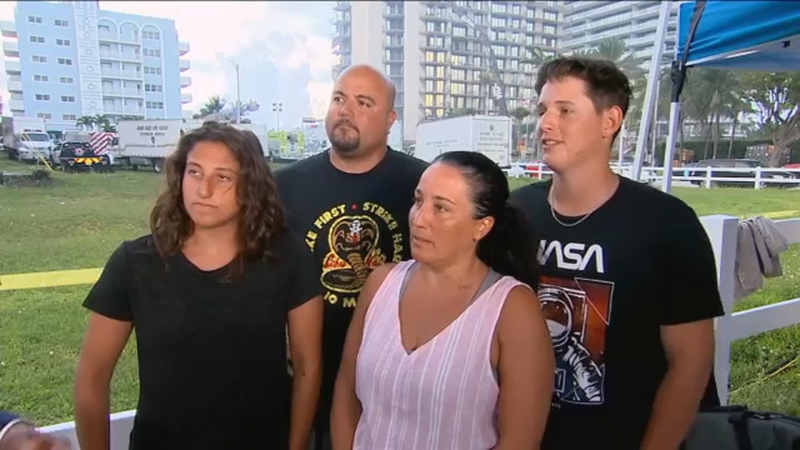 SURFSIDE, Florida -- The Aguero family from West New York, New Jersey was vacationing in Florida when they suddenly found themselves surrounded by rubble and amidst a tragedy.

Their condo in Surfside had collapsed, and they had just narrowly survived.

"Good Morning America's" TJ Holmes asked them what the collapse sounded like.

"It was like a really loud clap of thunder. Justin was awake so he heard multiple sounds. It was like three different distinct sounds," said Albert Aguero, the father. He, his wife Janette, and children Justin, 22, and Athena, 14, were all inside the condo at the time of the collapse on Thursday.

"You heard it, when did you think this was a problem," Holmes asked Justin.

"Probably the third one. It kind of felt like a jet took off above the building and being around Sandy (Superstorm Sandy) I knew that it was a lot different," Justin Willis said.

"What did you see first?" Holmes asked.

"The chandeliers and the pendant lights just swaying completely and that was not normal," Albert said. "It was not a clap of thunder, there wasn't a storm, it was something else. Really, until we opened the door, we didn't know anything happened in the building. The unit was intact."

"I looked to the left, and the apartment to the left was half sheared off. I looked forward, which is where the elevator shaft was and it was just a hole. So at that point, we knew it was a race against time because I didn't know if the rest of the building was coming," Albert said.

"At that point, you are feet away from maybe not standing here with me. I don't want to be dramatic in saying that, but that is quite literally the case," Holmes said.

"Why you guys?" Holmes asked.

"I don't know, it was just fate," Justin said. "It's unfortunate. But there's nothing we could have done to change it. Thankfully, our actions, our side of the building is still standing up. Me and my sister wouldn't have been alive had it collapsed and we saw it go out."

"What do you all think now seeing it in the daylight and seeing the damage and knowing you got out of there," Holmes said. "Again, this is a vacation home, your parents' place, you all come down here every once in a while. And mom, you said you weren't going to say much, but your face and your reactions tell the story, I can see the emotion, what's it like to lay eyes on it and see what you went through?" Holmes asked.

"I just don't know why we're here and the rest of the people aren't," she said through tears. "That's what's hard. And knowing how violently the building shook when we were, at least my husband and I woke up to that, him grabbing me and saying, 'What was that?' And the whole bedroom was just shaking so violently, honestly, I was prepared that the whole building was coming down because it wasn't something stable. There was nothing going on that seemed normal about it, so I jumped out and I think that's what's making me so emotional, is thankfully, in the moment I didn't realize it, but had I gone out into the hallway and seen that it was mere feet from the wall that my kids were sleeping in and were watching tv, it could have been a very different thing. I could have walked into the living room and checking on them and found that rubble, and it just, I don't think I've processed it. It looks like I am in that moment but I don't think I've really processed what happened," Janette said.

Their vacation was supposed to go on a bit longer, but the family now just wants to get back home to New Jersey.

Rescue and emergency crews at the scene continue to search for survivors but efforts have been hampered, as they've had to put out fires that keep breaking out in the rubble.

ALSO READ: What are crews in Florida dealing with after building collapse?
EMBED More News Videos

Eyewitness News spoke with the Jersey City fire chief about what crews in Florida are now dealing with.