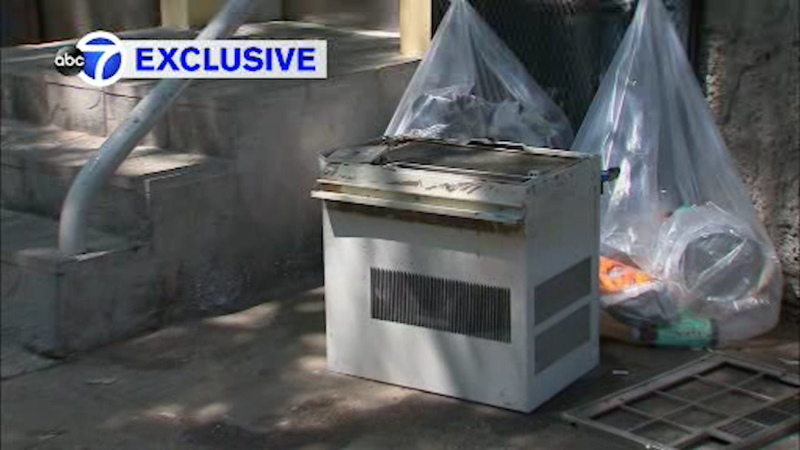 EAST HARLEM, Manhattan (WABC) -- As the weather heats up, more and more of us are setting up our air conditioners in order to keep cool. An NYPD officer spotted one dangling and prevented it from falling.

Masood Khani is talking only to Eyewitness News about how a huge air conditioning unit, probably weighing 80 pounds, came crashing down out of a window of a building on East 105th Street.

The bulky unit hit the super who happened to be standing right below.

"It fell on him and he went unconscious and he was lying on the floor," Khani said.

Is that air conditioner way up there installed properly so it won't fall?

"Whereas I might be able to duck it, even though I don't think so, certainly for my daughter I worry about it," a resident said.

There was an A/C unit hanging from a window of a building on West 76th Street last Thursday.

Good Catch PO Dobbins!! @UWS Summer is here & we must secure our AC's please install brackets or this can happen2 u pic.twitter.com/G6V5v2OPYi

"There was a lady yelling for help," said Officer Brian Dobbins, NYPD.

Officer Dobbins was in the neighborhood and rushed to help.

"A woman in a fourth floor apartment was trying to put in her A/C. It slipped. She was able to just grab the power cord," Officer Dobbins said.

Officer Dobbins said he was able to climb out to a second floor fire escape, lean over, and grab the unit.

"At one point I had to grab it, the side folds started to rip a little bit. I was kind of hoping I could keep hold of it. That's when the young lady starts sliding it. That's when I knew I had full control of it," Officer Dobbins said.

The Department of Buildings tells Eyewitness News everyone should use brackets to properly secure these window units.

There is no specific law requiring the supports, but inspectors do routinely check and issue violations if they spot things like bricks or blocks holding up the units.

"We do respond and we do issue violations if they're improperly installed. In the building in East Harlem, we did not spot any visible supports," said Commissioner Rick Chandler, NYC Department of Buildings.