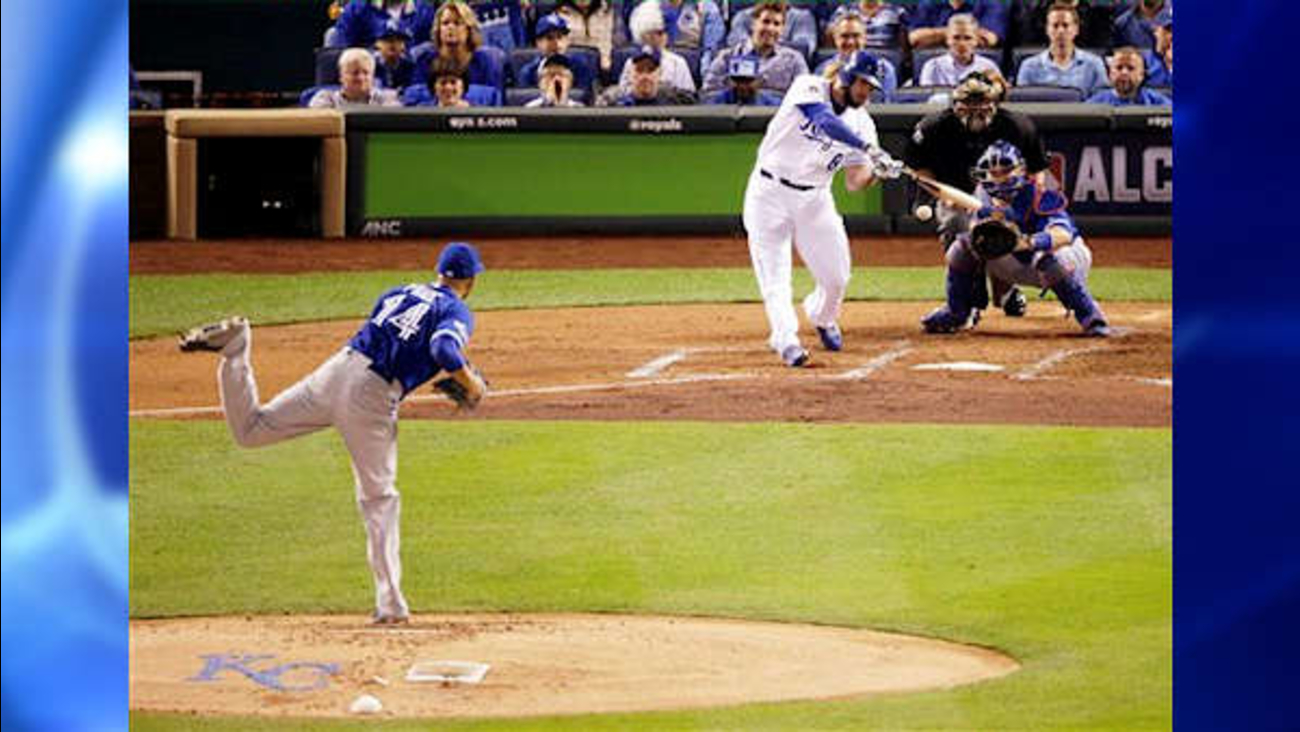 Lorenzo Cain sprinted home from first base on Eric Hosmer's single in the eighth inning, Wade Davis weathered a 45-minute rain delay and a white-knuckle ninth, and Kansas City beat the Toronto Blue Jays 4-3 Friday night to earn its second straight trip to the World Series.

Davis retired Blue Jays star Josh Donaldson on a grounder with runners on second and third to end Game 6 of the AL Championship Series.

The Royals open the World Series on Tuesday night at home against the New York Mets.

Jose Bautista's second homer of the game, a two-run shot in the top of the eighth, lifted Toronto into a 3-3 tie.

But any momentum Toronto might have had was washed away when a line of rain swept through town, sending players and fans scurrying for cover.

After the delay, Cain promptly worked a leadoff walk from closer Roberto Osuna, and Hosmer followed with a clean single that Bautista fielded down the right-field line.

Rather than hit the cutoff man, though, Bautista threw to second to keep Hosmer to a single. That gave the speedy Cain, running full speed the entire way and being waved home by third base coach Mike Jirschele, enough time to beat the relay throw from second base with a textbook slide that ignited a sellout crowd.

It was up to Davis, who got the Royals out of a jam in the eighth, to finish it off.

Davis gave up a single to Russell Martin and walked Kevin Pillar before striking out pinch-hitter Dioner Navarro. After stolen bases put runners on second and third, Davis struck out Ben Revere, then got Donaldson on a bouncer to third.

Kansas City shortstop Alcides Escobar was voted the ALCS MVP after going 11 for 23 (.478). And for the fifth time in two years, the Royals clinched a postseason series at home.

The Royals eventually swept their way to the World Series, where they succumbed to the San Francisco Giants in Game 7 with the tying run standing 90 feet away.

Kansas City will try to do one win better against the Mets.

For the Blue Jays, it was a frustrating ending to a late-season surge that ended their own postseason drought dating to 1993. They had rallied from a 2-0 series deficit against Texas in the divisional round, then staved off elimination against the Royals in Game 5 in Toronto.

The Royals wasted no time taking the lead off David Price, the Blue Jays ace who has been so good during the regular season but remains winless in eight career postseason starts.

Zobrist pounced on the tall left-hander in the first inning, pulling a 1-1 pitch from his old Tampa Bay teammate down the left-field line. Zobrist's second homer of the series gave Kansas City the lead and sent a capacity crowd of 40,494 into a towel-waving frenzy.

They hardly stopped by the time Moustakas came to bat in the second.

After scrawling the initials of his late mother, Connie, into the dirt with the end of his bat, Moustakas sent a 1-2 pitch from Price screaming over the fence in right. The ball was caught by a fan, 19-year-old Caleb Humphreys of nearby Blue Springs, Missouri, and the umpires briefly reviewed whether fan interference should be called on the play.

The review lasted 1 minute, 47 seconds, before crew chief John Hirschbeck announced that the replays were inconclusive. The home run stood and Kansas City had a 2-0 lead.

Rios added an RBI single in the seventh, but only after two marvelous plays by Toronto limited the damage. Revere made a leaping grab at the fence to rob Salvador Perez of a two-run shot to left, and second baseman Ryan Goins made a sliding grab to rob Alex Gordon of a single.

The defensive plays proved critical when Ryan Madson came on to pitch the eighth.

Madson allowed a leadoff single to Revere, and then struck out Donaldson, before peering in at Bautista in the box. The home run hitter who irked Kansas City fans all series followed his solo shot in the first inning with a tying, two-run homer to left that silenced the crowd - other than the smattering of boos directed at Madson on the mound.

The home run squandered a strong start by Yordano Ventura, who allowed only Bautista's first homer of the series and three other harmless hits in 5 1-3 innings. But it didn't seem to dent the confidence of the Royals, who have grown accustomed to tense postseason games.

There's a reason they were defending American League champions, after all.