Exclusive: Drivers who transport patients accused of texting behind the wheel 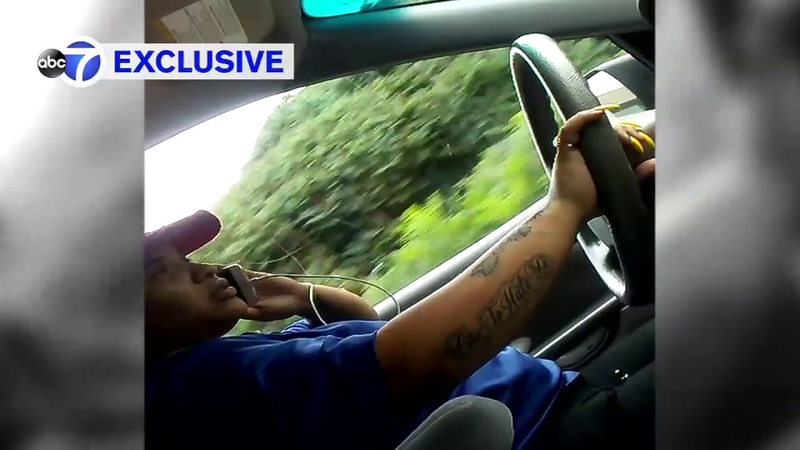 Patient says her drivers were texting behind wheel

NEW YORK (WABC) -- It's illegal to text or talk on a hand-held phone while driving in New Jersey, But one Medicaid patient says it kept occurring when she was transported to her medical appointments.

She became so concerned for her safety, she started documenting the unsafe driving with her cell phone.

A woman seen talking on the phone is a driver responsible for safely transporting Medicaid patients to their doctors' appointments.

Jim Hoffer; "You worry about your safety?"
Patient: "Yes."
Jim Hoffer: "So they ignore you when you tell them to stop."
Patient: "Hmm, that's why I record it because they don't listen to me."

This Medicaid patient reached out to us after experiencing drivers repeatedly texting or talking on the phone while driving her to a medical appointment. She requested that we not identify her.

She's documented at least five medical transport drivers texting or talking on their phones, some of them clearly travelling at highway speeds. We showed the video clips to an expert on distracted driving at New Jersey's Triple A.

"Those drivers were clearly not following the law, they were putting themselves and everyone they are sharing the road with in jeopardy," said Cathleen Lewis.

The drivers all work for companies that contract with a huge transportation broker called Logisticare located in New Brunswick.

The state pays Logisticare about $165 million a year to transport some of New jersey's poorest and sickest patients safely to their doctors.

In a statement to us, the company says "Logisticare has zero tolerance for texting and talking while driving", adding that they "take immediate action when we have evidence that a driver violated this policy, including suspension, re-training or dismissal."

"I don't want nothing to happen to me because of a stupid driver be driving, talking," said the patient. "I be prayin in my head, please God don't let nothin happen to me."

She says she has filed numerous complaints about the texting but it still keeps happening. Her fear is that she or some other patient will end up in a serious accident.

"They be doin that to other people. But I guess other people don't do nothing about it, somebody has to. For my safety and others," the patient said.

LogistiCare says 99 percent of the millions of trips they contract occur without any complaints. The state of New Jersey, in an attempt to cut down on phone communication with dispatchers, is requiring all Logisticare contractors to have G-P-S in all cars.

Email your questions, issues, and story ideas to 7OnYourSideJim@abc.com, call our confidential tip line 1-877-TIP-NEWS (847-6397), or fill out the form above.
You can also contact Jim Hoffer on Facebook and Twitter.
Related topics:
new jerseytexting while driving7 on your side investigationambulance
Copyright © 2022 WABC-TV. All Rights Reserved.
TOP STORIES
Travel Advisory issued in NYC for Monday due to severe storms
NYC expected to elevate to 'high' COVID alert level in coming days
Alleged gunman in Buffalo shooting asked to leave store day before
School Closings
Find out which schools are closed in your district.
What is white replacement theory? Belief fueling racist attacks
Buffalo suspect had plans to continue killing, commissioner says
What we know about the victims of the Buffalo shooting
Show More
NYPD steps up patrols, Adams to speak at vigil in wake of massacre
AccuWeather Alert: Gusty storms
2 killed in fiery crash in the Bronx
Shelton teen fatally stabbed, 3 others injured outside home
Formula shortage: Biden offers support, Suffolk launches effort
More TOP STORIES News