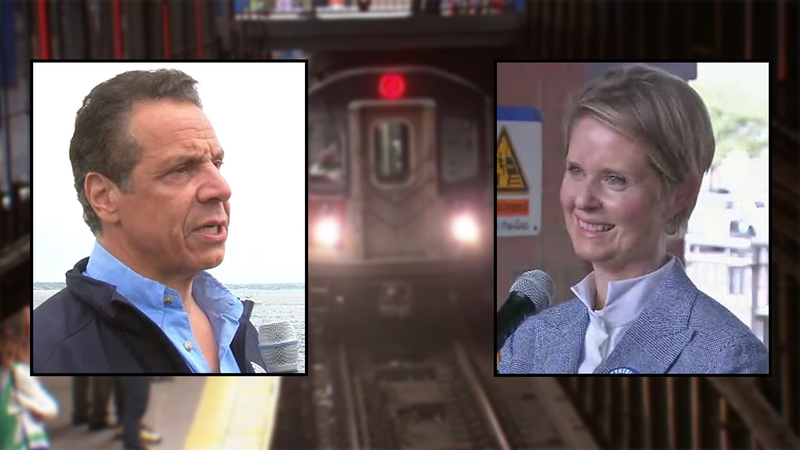 NEW YORK (WABC) -- A day after Governor Andrew Cuomo came out in favor of Transit Chief Andy Byford's estimated $19 billion plan to make major upgrades to the subway, Cuomo's challenger for the Democratic nomination, Cynthia Nixon, is unveiling her own plan to pay for it.

She said the fix will require multiple revenue streams. Her plan is similar to ideas that have already been proposed, including congestion pricing -- a $5.26 fee for cars to enter Manhattan's most congested areas -- a polluter's fee for companies that emit greenhouse gases, and a new tax on millionaires.

"He's shielding the wealthiest from this state from paying their fair share to rescue our trains," Nixon said.

In an earlier statement, the actress-turned-politician said Cuomo had "not made the subways a priority, because they are not a priority for his Wall Street donors," accusing him of paying more attention to the issue because it's an election year.

She was in Downtown Brooklyn Friday morning riding the subway and trying pitch her plan to commuters underneath a giant light up "#Cuomo'sMTA" sign.

New York City Mayor Bill de Blasio also supports hiking taxes on the wealthy, but with Republicans in control of the state Senate, Cuomo has always said the idea is a non-starter in Albany.

"Straphangers deserve a real plan and a real solution and no more political slogans," Cuomo told reporters on Thursday.

Cuomo has called for congestion pricing, normalizing tolls on the city's bridges and adding a surcharge of $2.50 of taxis, $2.75 on Uber and Lyft rides and $.75 on carpool rides, like Via, for rides below 96th Street.

The for-hire car surcharge was included in the 2019 budget and will take effect in January. It's expected to raise more than $400 million a year for the subway, but congestion pricing stalled in Albany and was not included in the budget.

"That's the only feasible realistic answer," Cuomo said. "Everything else is just politics."

Nixon argues that there is a blue wave happening and it will be possible to pass, if Democrats take control of the state Senate in the fall.

He's calling for the fix to happen within a decade and the plan includes closing down some busy subway lines during nights and weekends to speed it up.