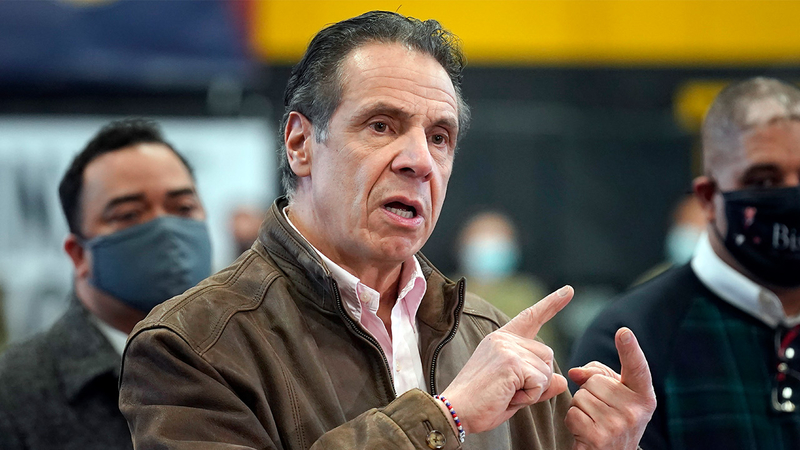 Here's why Cuomo's job is safe (for now), as harassment probe starts

NEW YORK (WABC) -- As Governor Andrew Cuomo faces both sexual harassment allegations and a nursing home scandal, a majority of New York voters say that the governor should not resign, according to a poll.

The poll conducted by Quinnipiac University between March 2-3, found that 55% of New Yorkers believe Cuomo should remain in office while 40% believe he should resign.

The disparity becomes even wider when looking at the votes by party.

According to the poll, 74% of Democratic voters are in favor of the governor remaining in office, while 70% of Republicans call for his resignation. Among independent voters, 52% back resignation while 44% oppose it.

While there are still calls for Governor Andrew Cuomo to step down from Republicans, those with influence in the state, say they want to wait to see the results of the state attorn

However, voters also say by a large margin of 59% to 36%, that they would not like to see Cuomo run for a fourth term.

"From popular to precarious, Governor Andrew Cuomo's political standing is on shaky ground," Quinnipiac University Polling Analyst Mary Snow said. "New Yorkers are not clamoring to have him step down at this stage, but they are signaling a willingness to show him to the exit door once his term is done."

When it comes to the recent sexual harassment allegations against Cuomo, the poll revealed voters say 59% to 27% that they are not satisfied with Governor Cuomo's explanation and apology.

Lawmakers plan to convene Friday to vote on whether or not to scale back Cuomo's pandemic powers moving forward.

According to the poll, a slim majority of voters say 51% to 46% that the New York state legislature should remove the emergency powers that were granted to Governor Cuomo last year to manage the coronavirus pandemic.

The poll has Attorney General Letitia James, currently investigating Cuomo's conduct, at a 61% approval rating, the highest of any elected official in the state.