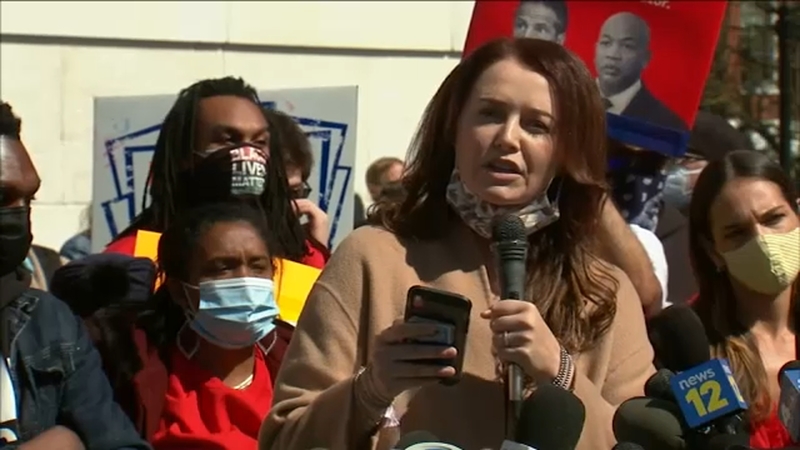 Cuomo accuser: Only way to hold governor accountable is to 'impeach him'

NEW YORK (WABC) -- One of Andrew Cuomo's accusers attended a rally in support of the state legislature taking steps to impeach the New York state governor.

Boylan said the only way to hold the governor accountable is to "impeach him."
EMBED More News Videos

"The Assembly must act swiftly," she said. "We have courageous leaders like majority leader Andrea Stewart Cousins, who we can count on to do the right thing. Speaker Hasty on the other hand, wields his power to protect the governor and uphold a system that dismisses and abuses us. New Yorkers deserve a transparent and honest impeachment process, not a sham investigation led by people with ties to Governor Cuomo."

Boylan reinforced her truth to the accusations made against Cuomo.

"In December, I spoke truth to power on the harassment and bullying, I faced working for Governor Cuomo, and when the governor should have been focused on leading us out of this pandemic, he was instead focused on covering up the deaths of 15,000 New Yorkers and smearing me and my reputation," she said. "Since sharing my story, six more women have come forward with their experience of being bullied, harassed and assaulted by the governor of New York."

The Manhattan Borough President candidate added that, "When the governor lies about his abuse of power, as he's doing right now and daily, it's a betrayal of the public's trust abuse does not confine itself to one person or one area."

"Someone who abuses their power doesn't just do it to one woman, or one community, they do it on some level, to every person and every community," Boylan said.

Marcus Solis has the latest on the sexual harassment allegations against NY Governor Andrew Cuomo.

Alyssa McGrath, 33, a current administrative assistant in Cuomo's office, told The New York Times that he looked down her shirt, quizzed her about her marital status, and told her she was beautiful, using an Italian phrase she had to ask her parents to interpret.

In the interview, published in The New Yorker, the governor's former adviser provides new anecdotes of the embattled governor's alleged harassment, bullying, and intimidation tactics.
Boylan, 36, first came forward with allegations in December and fleshed them out in a late February blog post amid scrutiny of Cuomo for the pandemic's death toll among residents in state nursing homes. At least seven women total have come forward with claims since.