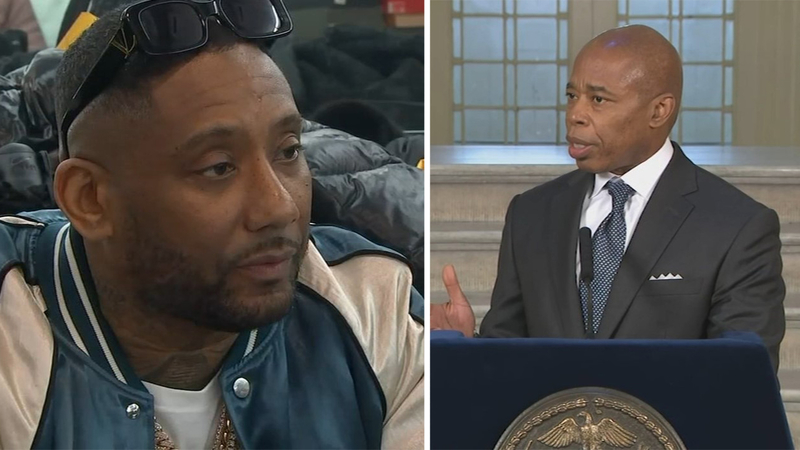 NEW YORK CITY (WABC) -- Mayor Eric Adams is turning to the entertainment sector for help with tackling the recent rise in crime.

Adams met with three prominent American drill rappers to discuss the genre's violent overtones and its effect on fans.

"Violent people who are using drill rapping to post who they killed and then antagonize the people who they are going to kill is what the problem is," Adams said. "And they heard me. And we're going to be rolling out something in the next few days to deal with this issue."

Fivio Foreign, Jim Jones and Maino all agreed to participate in the mayor's anti-violence campaign.

At first the musicians were wary the mayor would try to ban the subgenre of rap, but he assured him that wasn't the intention of the campaign.

Maino, who's real name is Jermain John Coleman, said that at its core drill rap doesn't inspire crime, but tells the violent story of the real streets.

"The lyrics are a manifestation of what's already happening, Coleman said. "They are actually living their reality. So if their reality was different they would rap about different things. So what comes first?"

Adams pointed to the death of 18-year-old driller rapper Jayquan McKenley, known as CHII WVTTZ, who was fatally shot outside of a recording studio in BedStuy as an example of the violence that comes from the music.

Initially, McKenley's father said he thought Adams was politicizing his son's death, but the two men have since spoken about the campaign and seem to be reaching a better understanding.

"I believe the outcome of this, is that he and I are going to be partners to stop seeing our young men become victims of this level of violence, and ladies," McKenley said. "And to go after those things that were just mentioned, the drill rapping, the over proliferation of guns. I believe that he is going to be a symbol of the dads all over this country that are concerned about their families, and I'm looking forward to that, and I'm looking forward to continuing the conversation."

"We pulled Trump off Twitter because of what he was spewing. Yet we are allowing music, displaying of guns, violence, we allow it to stay on these sites," Adams said.

And while Adams is taking other strides to curb gun violence, he's hopeful that getting these rappers on board will help spread the anti-violence message.