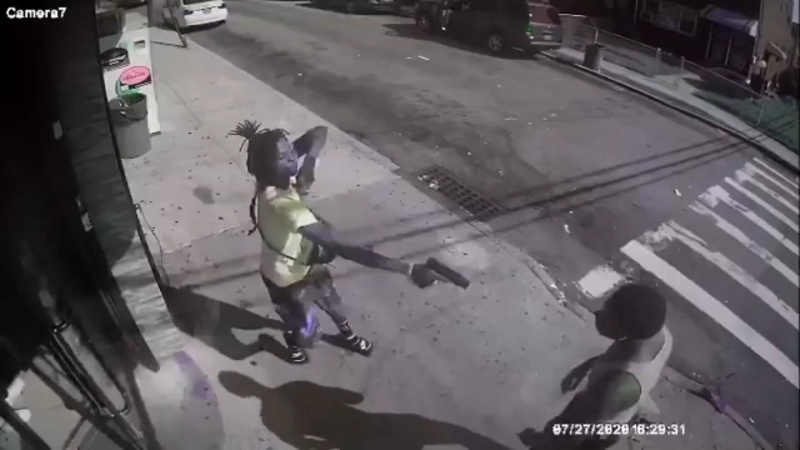 QUEENS (WABC) -- A suspect was arrested in the involvement of a shooting that left a college student and former player on the SUNY Buffalo football team critically injured in Queens Monday afternoon.

The NYPD announced the arrest of Jeffrey Thurston Wednesday.

The incident happened in front of a 136 Deli & Grill on Springfield Boulevard.

The victim, 20-year-old victim Malachi Capers, apparently bumped into the suspect inside of the bodega and a fight broke out.

The altercation spilled outside of the bodega onto the sidewalk, where police say Thurston took out a gun and shot the victim.

Police describe Thurston as having dreadlocks and wearing a white shirt.

Capers was rushed to the hospital in critical condition but is expected to survive.

He previously starred at Flushing High School and played a defensive end at SUNY Buffalo. He remains a student there, majoring in psychology, though he has not played football since the 2018 season.

"Malachi was a well-liked member of our football family during his freshman year in 2018 and has remained a friend to many in our program as he has continued his education at Buffalo State after leaving the team due to on-going injury issues," Buffalo State head football coach Christian Ozolins said in a statement. "We have him in our thoughts as we wish for a speedy and full recovery."

Anyone with information pertaining to Thurston's location is asked to call NYPD's Crime Stoppers Hotline at 1-800-577-TIPS (8477).

The shooting is the latest in the surge in gun violence across New York City. On Monday alone, there were 10 shootings with 12 victims.