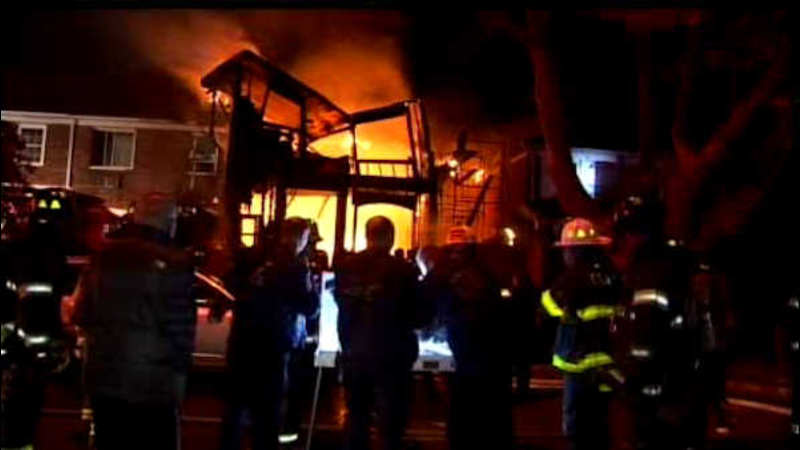 Police searching for arsonist in Queens

FOREST HILLS, Queens (WABC) -- The NYPD is searching for an arsonist they say is behind a series of suspicious fires over the past month in Queens.

Seven fires have broken out at homes under construction in Forest Hills. The latest, early Sunday, was at a residential construction site on 69th Road that was also set on fire back on November 15.

After the fire, the NYPD released a photo of a man on a motorcycle thought to be a person of interest, but he was interviewed and determined to be a passing first responder not linked to any of the fires. Detectives are still looking for a man captured on surveillance in a fire on 67th Drive on November 25.

The NYPD says patrols have been stepped up in the area.

"We believe that it's someone within the area, because that person disappears quickly into the neighborhood as soon as we track him after the fire," NYPD Chief of Detectives Robert Boyce said. "It's unusual. "Usual pattern with arsonists use accelerant. Here, he using materials at the scene."

The home involved in the latest fire was the future home of Rabbi Zalman Zvulonov, who tells Eyewitness News that his family -- wife and six children -- had planned to move in by the end of February.

Jonathan Kazakov lives next door to the home that was destroyed, and he says the stress of everything is just too much.

"My niece and nephew were sleeping on the side, and when I came into the room, the whole window was red," he said. "Just grabbed them and quickly ran outside. We need to catch the guy who's doing this before someone gets hurt. All these houses under construction are gone, where is he gonna go next, to the houses where people are living?"

Inside Kazakov's home, firefighters had to pull down parts of ceilings and walls to keep the fire from spreading. His mother tells Eyewitness News that on the first night of Hanukkah, they planned to not be home.

Ed Sangcap also lives next door in a house that suffered significant damage both on the second floor and outside.

"She was yelling, 'Get up, get up, there's a fire in our neighbor,'" he said. "So I guess we'll have to replace some part of the roof and side."

Officers are now canvassing the community trying to pinpoint which surveillance cameras captured what.