As states reopen, workers forced to choose between health and livelihood 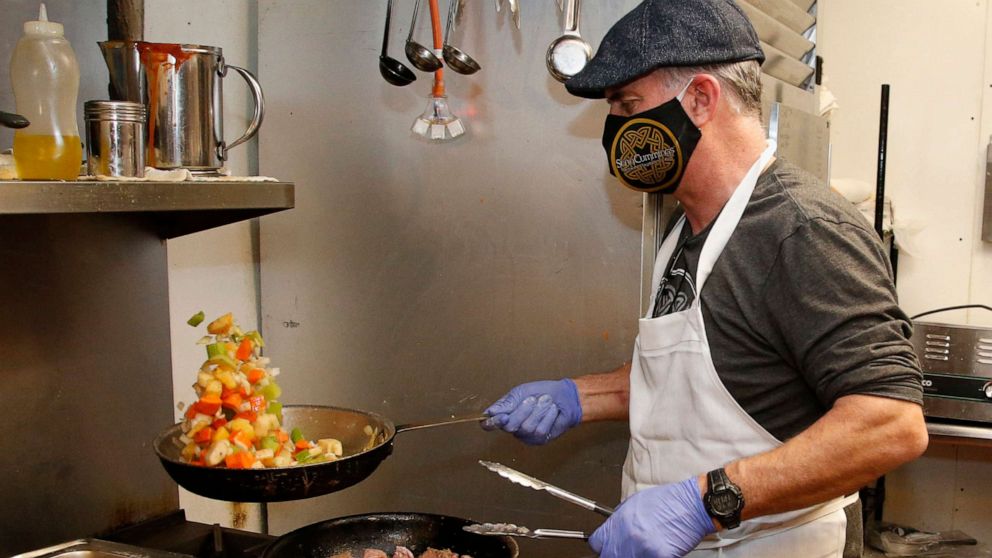 As an increasing number of states begin reopening businesses, some workers feel forced into a game of Russian roulette, confronted with the difficult dilemma of choosing between their health and livelihood.

"This is like choosing between life and death or a paycheck," Veronica Wells, of Las Vegas, told ABC News. "I've never even imagined that I'd have to choose something like this."

When the novel coronavirus pandemic hit in March, Wells lost her job, after her employer, the National Park Express, a Chinese American travel company, ceased operations.

Wells, a mother of five and grandmother of four, is among the millions of Americans who have had issues registering for unemployment benefits.

Despite more than 30 million Americans having filed for unemployment, there is still a considerable backlog of people who have not been able to file claims because of overwhelmed state unemployment agencies.

Out of work for two months because of illness, Wells' husband, Michael, has been using up vacation days from his job at the Salvation Army after developing pneumonia in February.

Confronted with mounting bills and a 17-year-old daughter still in high school, Wells said their only option is her husband resuming work, despite concerns from his doctor.

"He will not sit back and let us suffer, you know, he needs to provide for his family and that's the way he looks at it," said Wells.

"I am absolutely terrified to send my husband back to work," said Wells. "He's over 50 and has a compromised immune system. He gets sick easily, and he gets really, really sick. I believe that if he catches this virus, it will kill him."

Although the White House's plan for reopening the economy offers general guidelines to mitigate the spread of the disease in the workplace, ultimately it is up to the states and to the businesses themselves to determine safety practices.

Dr. Anthony S. Fauci, director of the National Institute of Allergy and Infectious Diseases, warned local leaders not to take "a bit of a chance" by "leapfrogging" over the first critical checkpoints established by the White House. "Obviously you could get away with that, but you're making a really significant risk," he said during a CNN town hall on COVID-19 Thursday night.

In Iowa, Republican Gov. Kim Reynolds announced limited-capacity reopenings, starting May 1, for restaurants, fitness centers, retailers and religious gatherings. In a press conference last Friday she declared that employees' refusal to return to work would be categorized as a "voluntary quit" and thus, "they would not be eligible for the unemployment money."

Some Americans fear they will be returning to workplaces with potentially inadequate safety precautions in place to protect themselves.

"I'm scared to go back to work," Tyler Stone, who works full time as a barista in Des Moines, Iowa, admitted in an interview with ABC News.

Stone is among those who was expected to show up at work on Friday, but because he suffers from asthma, his doctor has advised him to avoid potential exposure to COVID-19 as much as possible.

Stone, who has been receiving unemployment benefits for the past several weeks, fears not only for his own health, but that of his family. Although the Centers for Disease Control and Prevention continue to advise social distancing, his job is one that does not allow him to remain 6 feet away from people.

"I don't really have a choice. I can't afford to lose my job," Stone said. "If I do the thing that I'm being advised to by my doctor, which is stay home, I lose all my income. I can't not pay my bills. I need to have a place to live; I need to be able to eat."

"The governor's going to get thousands more people sick and killed in the name of 'getting Iowans back work,' meanwhile, those who are most vulnerable have had the rug pulled out from under them and been given an ultimatum of risking their health at work or staying home without income," Stone said.

Seth Amos, 24, of Oklahoma City, told ABC News that he fears returning to work, too.

"It doesn't seem like the states care about people's health. It just seems like everyone's just worried about one thing and that's money, instead of people's lives," Amos said.

Amos, who works as a server at the Melting Pot, an upscale dining restaurant in Oklahoma City, has been on employment for nearly six weeks, and despite his own health concerns, he plans to return to work in the coming weeks.

"I'd be more than excited for all this to be over, but to be honest, it's not over, and people keep on trying to act like it is. Can't we just wait till this goes away or dies down a little bit more? I'm afraid it's going to just keep on getting worse and worse,"Amos said.

A similar guidance was issued by the Texas Workforce Commission, protecting workers who are most vulnerable to the virus from being penalized for choosing not to return to work.

However, if employers abide by safety guidelines, such as providing protective equipment and following social distancing guidelines, "it may be difficult to establish a good-faith basis to quit due to safety concerns," said Iowa's Workforce Development Director Beth Townsend.

"It takes more than a mere assertion by the employee" to establish that a workplace is unsafe, Townsend said.

In response, the Iowa Policy Project, a nonpartisan research group, issued a statement Thursday accusing Reynolds of "misrepresenting" the workers' legal protections during the pandemic health emergency, and of having "repeatedly declined to take steps to enforce safety standards in businesses that she wants to reopen," and thus "bullying workers into work arrangements that they could never have expected.

Some Republican politicians have suggested that there are financial disincentives to going back to work, because it is actually more lucrative to receive unemployment, with the additional $600 a week from the federal stimulus bill.

"A lot of people are having trouble rehiring workers because the workers are saying to them, 'I'm making more on unemployment,'" Rubio said on an appearance on "Fox and Friends" on Wednesday.

The same sentiment was echoed by Sen. Rick Scott, R-Fla., in a tweet on Tuesday.

Stone bristled when asked about these remarks. Although he acknowledged making more at home than when he worked, he explained, "at the end of the day, ultimately, I don't want to be unemployed."