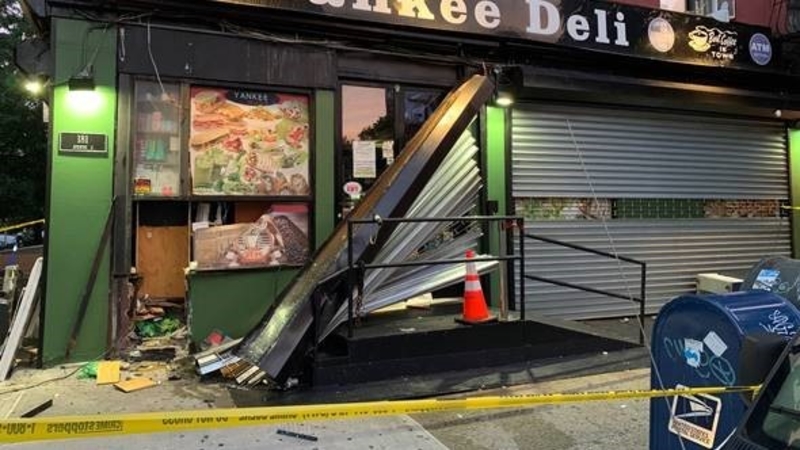 EAST VILLAGE, Manhattan (WABC) -- Police are looking for two men who stole an ATM from a deli in Lower Manhattan overnight Friday.

A woman walking her dog called 911 around 4:30 a.m. to report the two men using a large piece of equipment to cut the roll-down gate at the Yankee Deli on Avenue C in the East Village.

Authorities believe they then used a white van to rip out the ATM.

Related: Woman who uses a wheelchair robbed at ATM inside Bronx bodega

The suspects loaded the ATM into the vehicle with New Jersey plates and fled the scene.

The driver of the van gunned it so hard most of the wall came down along with the ATM he was trying to steal.

The bodega suffered structural damage, with the gate and wall collapsing.

"I can't believe that happened to my store because the neighborhood is quiet here, and it's crazy," Collado said.

The whole thing took about 10 minutes.

One man used a crow bar to attach a chain around the ATM built into the wall of the deli.

It was early in the morning, but people did walk by in the middle of it.

"To be perfectly honest, you get a tear in your eye at first and you say what the hell is this all about, why? store manager Tom Mazenis said. "Why is this happening here? Why is there so much damage and so much vandalism, this looting has to stop, it hurts so badly."

It's not clear how much money was in the machine, but the damage to the store will cost thousands of dollars.

No arrests have been made, and the investigations is ongoing.

"I'm very angry when I see that, because before the city was good, but now the city is crazy, there's not a lot of police in the street," Collado said.