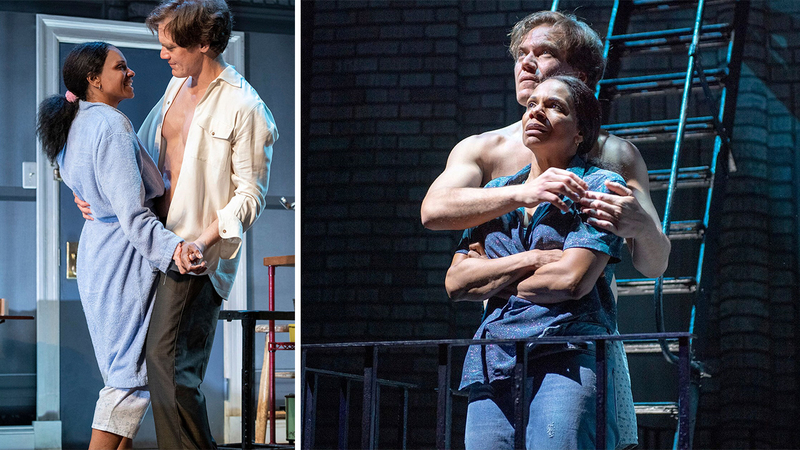 NEW YORK CITY (WABC) -- This is what Broadway is all about: six-time Tony Award winner Audra McDonald opposite two-time Oscar nominee Michael Shannon in the revival of a two-character play set right here in New York City.

"Frankie and Johnny in the Clair de Lune" opens with their characters having sex, fully naked, which puts a premium on mutual respect.

"I feel very safe with Michael, and that's very important," McDonald said. "You need to be able to trust your acting partner, and especially with something like this, where they're so vulnerable."

This marks her first nude scene, but both stars are stage veterans, and the pair share a seriousness of purpose.

"With Audra, I feel a real kindred spirit," Shannon said.

"Frankie and Johnny" both work at the same cheap restaurant. She is a waitress. He's a cook.

McDoanld calls them, "broken souls," and their relationship plays out in the bad old days of the 1980s, when Hell's Kitchen lived up to its name.

"It was kind of an ugly period in the history of the city," Shannon said.

But despite the seedy setting, or maybe because of it, Johnny's desire for love among the ruins is timeless.

"It's a push and pull," McDonald said. "Because Johnny is doing everything he can to force Frankie into trusting that this can turn into something wonderful and miraculous."

It's a look at romance in middle-age, which is romance without illusions.

"We all expect romance to kind of fall out of the sky and conk us in the head and take us off to some never-never-land," Shannon said. "But it's actually something we have to create."

We can create that by taking risks and being vulnerable - just like these characters and the performers who play them.

McDonald and Shannon are two of the busiest actors in the business, so their run on Broadway is limited and lasts on until August 25.