Texas plane crash: No one seriously injured after MD-87 jet heading to Boston crashes on takeoff

J. Alan Kent, Flair Builders corporate executive, is one of the 21 people on board when it crashed.
KTRK
By Pooja Lodhia, Brhe Berry, Stefania Okolie and Shelley Childers 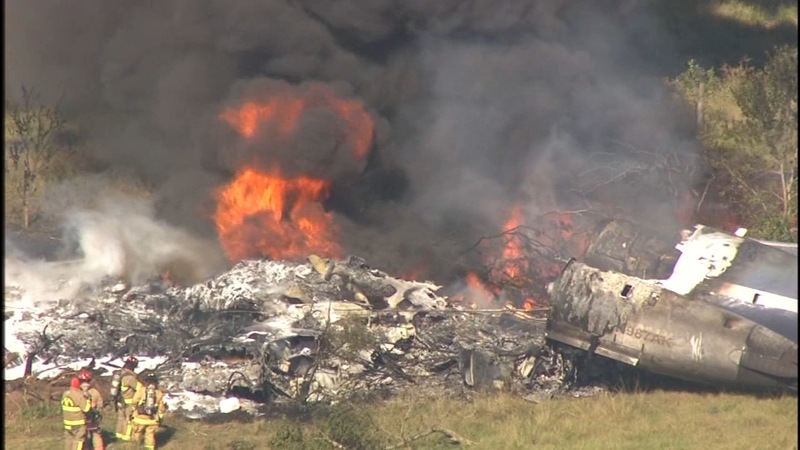 WALLER COUNTY, Texas -- An emergency response got underway mid-morning Tuesday in the wake of a plane crash just outside of Houston.

Texas Department of Public Safety confirmed the incident in a field at the Houston Executive Airport, near Brookshire, Texas.

ABC13 coverage from SkyEye shows the wreckage of the plane crash. The Waller County sheriff says 21 people were on board, but all made it out safely.

According to Waller County Sheriff Troy Guidry, 21 people, which included 18 passengers and three crewmembers, were on board and all made it out safe. Two people were sent to the hospital.

The youngest person on board is a 10-year-old, officials said. Fortunately, no one was killed, Guidry added.

Tire tracks show that the plane never really got off the ground. Here's what we saw from SkyEye.

Photos obtained by ABC13 show black smoke coming from a field around the scene of the crash.

From above the scene, SkyEye captured firefighters attempting to douse flames of the wreckage, with the aircraft's tail intact.

Since the incident, FAA identified the aircraft as a McDonnell Douglas MD-87, adding that the plane rolled through a fence and caught fire in a field while attempting to depart the executive airport just after 10 a.m. CT.

Eyewitness News obtained emergency dispatcher's audio that directs first-responders to the site of a crash near Houston Executive Airport.

"During the departure, it looked like a normal departure. Like I said, once it got behind the hangers I could not tell myself what was going on with the aircraft," said the airport's executive director Andrew Perry. "It should have been up in the air. I knew something was wrong and then a couple of seconds later, we saw the fireball and went rushing to the scene."

The federal agency also confirmed that all passengers and crew on board exited the aircraft safely.

Eyewitness News has also learned the plane is registered under the name of J. Alan Kent, who is the corporate owner of Flair Builders, a custom home builder based in Spring.

J. Alan Kent, a builder from the Spring area, is OK after he was aboard the plane during the crash.

In a phone call with Kent, he confirmed he was on board at the time of the crash and that the group was headed to Boston for a trip to the American League Championship Series game against the Red Sox.

The National Transportation Safety Board is leading the investigation.

Meanwhile, utility company CenterPoint Energy said an outage impacting more than 1,800 customers near the scene of the crash was caused by the plane taking out an overhead powerline during takeoff. Since the outage, power was restored to all but 17 customers.

It's not immediately known whether the powerline contributed to the crash.

WATCH: Expert offers insight into what may have happened in plane crash
EMBED More News Videos

An aviation expert looks at the circumstances surrounding the plane crash during an aborted takeoff from Houston Executive Airport.