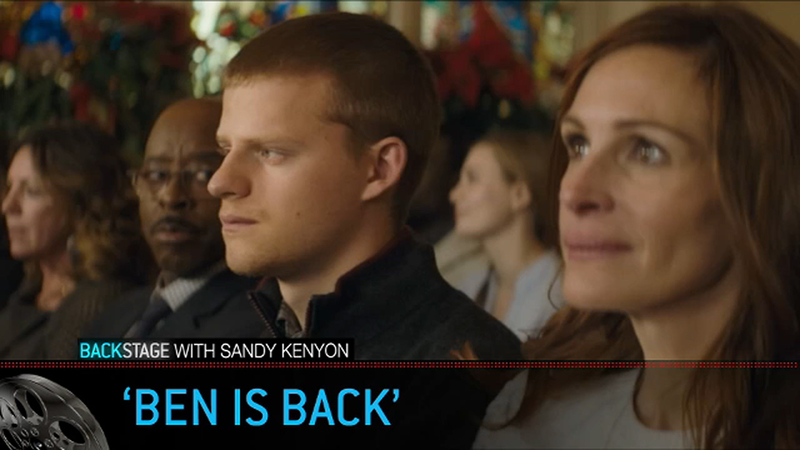 NEW YORK (WABC) -- A new film starring Julia Roberts and Lucas Hedges is being praised for its performances and its timely story about one family's attempt to cope with addiction.

"Ben is Back," home for Christmas while struggling to recover from drugs.

Roberts thought Hedges should play her son, but he was reluctant at first because the film was written and directed by his real-life father.

"I grew up in a family ravaged and nearly destroyed by alcoholism," dad Peter Hedges said. "I wanted to understand how someone who is starting to do well could slip. How does that happen?"

As a teenager, Lucas Hedges was nominated for an Oscar for his performance in "Manchester by the Sea." But this movie presented a new challenge.

"The script was so good that I was forced to really consider working with my dad," Lucas Hedges said. "And then when I really considered it, I was like, 'Yes, absolutely, I want to.' My dad has so many strengths that I think feed into mine."

The father and son separated themselves from their family relationship, even allowing son to call dad by his first name.

"My wife suggested to Lucas that, 'If you would just call dad Peter, that would normalize,'" Peter Hedges said. "And words often are what lead us, and that's what he did, and that's how we did it."

Roberts, of course, has been a household name for decades. But here, she was forced to lean on Lucas Hedges -- all the more reason for her to be proud on insisting he take on the role.

"I do like to take full and total responsibility for Lucas in this movie," she joked. "And in his life."