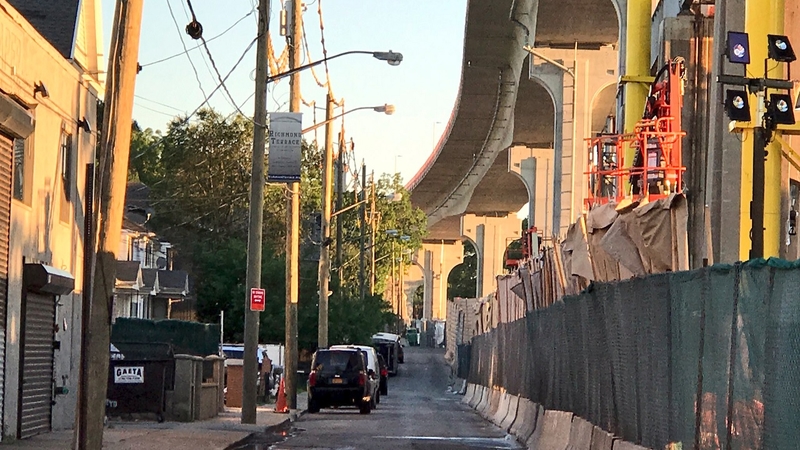 PORT RICHMOND, Staten Island (WABC) -- Construction projects often bring unintended consequences, but what is happening on the reconstruction of the Bayonne Bridge goes beyond the normal snafus. Work on part of the project was suspended Monday night because debris is falling and doing damage on the streets below.

On Newark Avenue, in the shadow of the billion-dollar bridge reconstruction, debris has rained down for four long years - and that was before they started demolishing the old bridge. Since then, Vaughn Bellochio says it has gotten even worse.

"We don't want the extra business - we just want to survive the day," he added.

Bellochio says the Port Authority, which operates the bridge has already reimbursed him for the $200,000 in damage to customer's cars in his lot. On Monday, just up the street something fell on cars in an area where construction workers park.

Residents say there used to be netting under the old bridge until about two weeks ago when a storm blew through. It has never been replaced. The neighborhood is littered with paint chips - not far from a sign warning of the dangers of lead.

"We just don't know what to do right now," Ronald Puzo said.

For now, Puzo is holding on to a trash bag full of splintered and jagged two-by-fours which vaulted like javelins off of the bridge. He is hoping he won't have to add anything else.

The Port Authority has been trying to make things easier for people. They reimburse for repairs, handing out carwash coupons, even offering free hotel rooms. However, they could not answer why there are no nets to protect those who chose to stay behind.
On Monday night, the Port Authority says it suspended work over the neighborhood until they can ask their contractor and find out what happens next.
Report a correction or typo
Related topics:
port richmondbayonne bridgeport authoritydemolition
Copyright © 2022 WABC-TV. All Rights Reserved.
TOP STORIES
LIVE | Zeldin addresses supporters after winning GOP nomination
New York Primary Results
Witness: Trump grabbed steering wheel, demanded to go to Capitol
Mayor: Giuliani should be investigated for falsely reporting crime
Epstein associate Ghislaine Maxwell sentenced to 20 years in prison
AccuWeather: Warmer but still dry
Dozens of campaign workers owed thousands by candidate for NY governor
Show More
Classmates honor slain teen at high school graduation in NJ
FDA advisers recommend updated COVID booster shots for fall
Grandmother of Uvalde school shooter released from hospital
15 adults, teens treated for carbon monoxide exposure on Long Island
Navy SEAL Museum opens on Long Island
More TOP STORIES News