Bicyclist thrown from bike after slamming into black bear in Connecticut 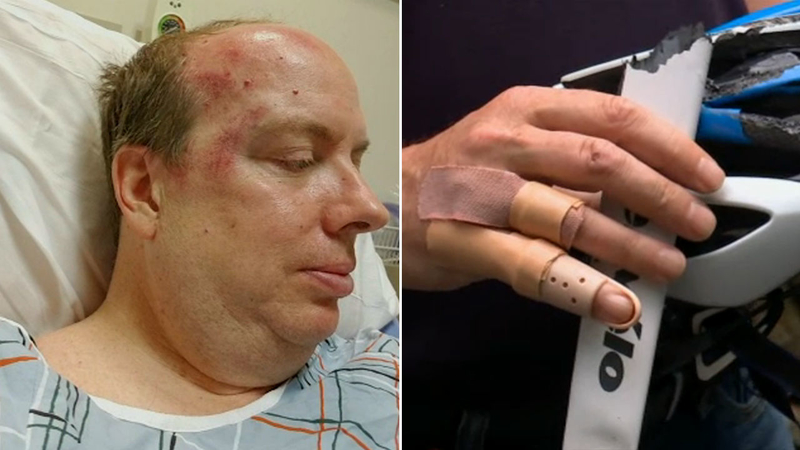 Bicyclist thrown from bike after slamming into black bear in Connecticut

EASTON, Connecticut (WABC) -- A bicyclist in Connecticut is on the mend after he slammed into a black bear while he was out for a ride.

Triano was coming down a hill, across a bridge and around a corner when a big black bear came out of the woods.

The bear was too big to go around and too big to avoid, so Triano plowed right into it. The impact was so hard it threw him off his bike.

"I apparently flew off my bike over the bear, over the handlebars, landed on the road, slid I don't know how many feet, but several feet," Triano said.

Along with an injured hand, the 52-year-old suffered some severe road rash and numerous aches and pains.

But he didn't suffer a concussion or headaches thanks to his helmet.

"The helmet took the brunt of the impact," Triano said. "You can see here the helmet cracked which is what it's supposed to do. And that protected my head.

After the impact, Triano was on the ground helpless when it dawned on him he didn't know where the bear was.

"I recall seeing the bear trot away down towards a little brook they have there," he said. "That's one thing I didn't think about, but people are saying you are very lucky the bear didn't come back at you."

Triano's $5,000 bike didn't fare as well. The front fork broke off and the frame is cracked.