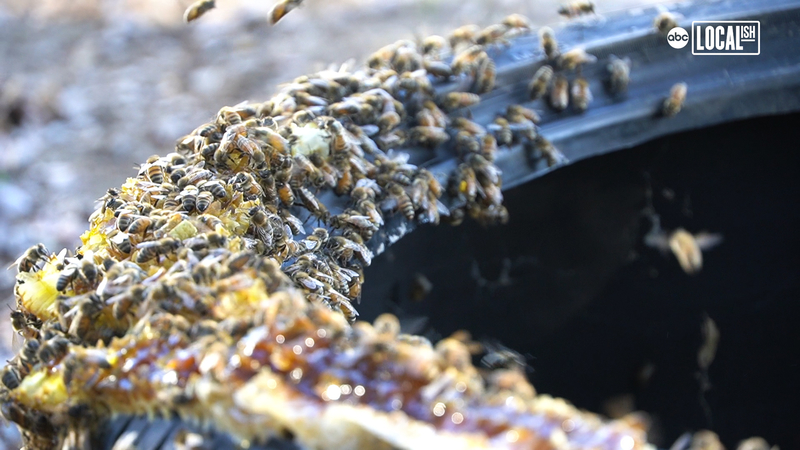 KINGSBURG, Calif. -- Instead of calling an exterminator when you find bees at your home, how about a bee rescuer?

"There's always a shortage of bees... so I want to give them every chance possible to survive without being exterminated," said Daren Hess, a beekeeper in Kingsburg, California.

If someone in the area finds a hive of bees on their property, they can call Hess. He'll then come out, beekeeping suit and all, and work to get the bees out of where they're staying and into a box he can remove from the property. He says he finds hives of bees living inside people's walls, in garbage cans, stacks of tires, etc.

His main objective is to get the queen into the box - if she goes, the rest will follow.

"I set the box where the nest was so that when the returning bees come back, they'll go to that location to the box," he said.

Hess then waits until nightfall (when all the bees have gone into the box), puts the box in his truck, and takes it out to an orchard. When the next morning comes, the bees are surrounded by hundreds of trees to pollinate.

"So an orchard like this... they require pollination of honeybees in order to produce the fruit," Hess said. The bees collect nectar from the fruit trees as a food source, taking pollen from the tree with them and dispersing it to other trees, resulting in cross-pollination that benefits the entire orchard.

"Currently, most of my bees are right here, pollinating plums and then apples," Hess said while standing in the orchard in Kingsburg. "And then afterward, they'll go into some kiwis, and after that possibly into some watermelons and some pumpkins."

Hess also runs Kingsburg Honey, where he and his family bottle and sell raw honey made by the bees he rescues.

"I've been stung countless times. And it's usually not too much of a problem. I've kind of gotten used to it," Hess said. "Unless I get stung on the nose. Then I want to raise the price of honey."

"It's interesting to me. I never quite figure out what the bees are thinking... it's very challenging," he said.

"But it's really rewarding when everything works out, and it's rewarding when I go get a swarm, the homeowner is happy, I'm happy, and the bees are happy, and I get to be the hero sometimes."
Report a correction or typo
Related topics:
kingsburgagriculturebeesfruitfarminglocalish
LOCALISH
Dine where David Bowie, The Foo Fighters and No Doubt once recorded hit songs
Brothless Ramen Dish Satisfies Your Cravings
A healing refuge for SF's Tenderloin neighborhood
This NJ shop serves a pretzel cheesesteak that's a must-try!
TOP STORIES
Meat Loaf, 'Bat Out of Hell' rock superstar, dies at 74
Burglary suspect who fired at police in Bronx was out on bond
CDC says omicron in NYC wastewater before reported in South Africa
Watch NatGeo documentary 'The First Wave' free for 48 hours
7 On Your Side: Tips for ordering your at-home COVID tests safely
AccuWeather: Frigid Friday
18-year-old taking groceries to grandma killed by stray bullet in NJ
Show More
10-year-old child struck by vehicle in Queens; Driver in custody
FDNY, NYPD perform water rescue saving two children from frozen pond
Teachers union says LI district not enforcing mask mandate
Man shot in leg during robbery in Brooklyn
Long Island high schooler bowls perfect game 2 weeks after 299
More TOP STORIES News