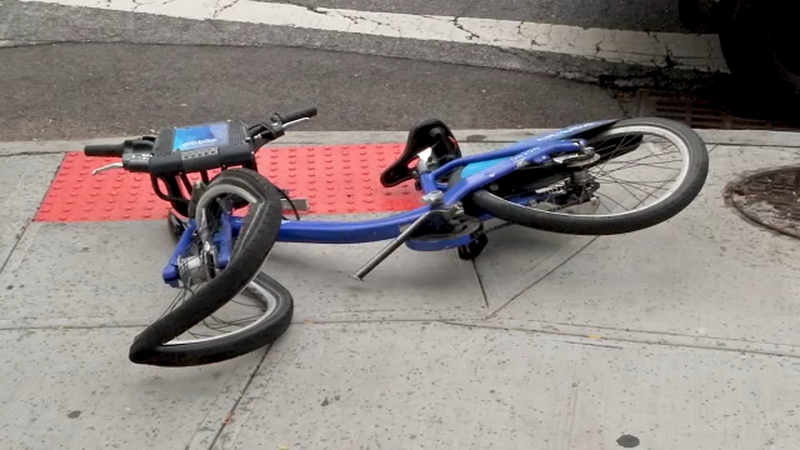 The latest involved a cyclist being struck by an MTA bus at 6th Avenue and Central Park South around 4:30 p.m. Tuesday.
EMBED More News Videos

Jim Dolan has the latest on the bicycle accidents in New York City.

Earlier, a cyclist reported getting logged under a fire truck in Prospect Heights, Brooklyn, and on the Upper East Side at 96th Street, a bike rider was injured when he was hit by a car trying to make a turn.

In each case, cyclists were able to walk away from those accidents. There were no protected bike lanes in any of the incidents.

These accidents happened as public officials call for charges against a driver in a collision on Sunday that killed the city's 19th cyclist this year.

At the current rate, 30 cyclists could die by the end of the year. That's more than three times the number of cyclists who died last year. Danielle Leigh reports.

That 19th victim was killed after a driver in Brooklyn was accused of running a red light, setting off a chain reaction that led to the fatal multi-vehicle crash.

"If he was speeding and ran a red light, that could result in a charge of vehicular manslaughter," Chief Terrence Monahan said.

Monahan said police would be stepping up enforcement and education efforts directed at drivers and cyclists in response to the influx in fatal accidents.

"There's a personal responsibility that has to be taken by everyone involved," Monahan said. "As much as we want our cars to be respectful of the bicyclist on the road, as a bicyclist, you do have to you know, exercise some caution for yourself."

New York City Public Advocate Jumaane Williams abandoned his vehicle and rode across the Brooklyn Bridge with cycling advocates to rally for safer streets following the collision and coinciding with the series of bike accidents.

"This is to figure out how everybody can have an opportunity to use our streets without fear of death," Williams said as he began his trek.

An investigation in Sunday's crash continues.