Bison in SUV was rejected by mom; Tourist was trying to find help 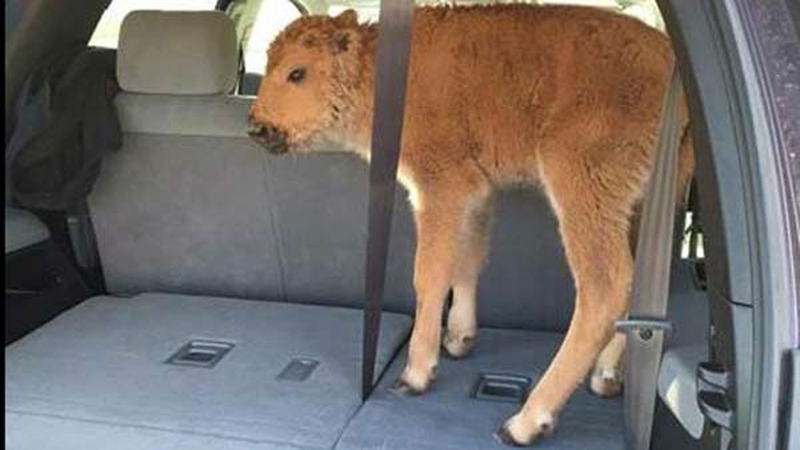 HELENA, Mont. (WABC) -- There are new details in the death of a baby bison at Yellowstone National Park that has sparked so much outrage. Park officials are now explaining why they had to euthanize the bison after tourists put it in their van.

New video taken by a different park visitor reveals the story behind the bison that put in the back of a visitor's SUV. It show the little calf earlier struggling to make it across a river and keep up.

Later, it approached the visitors in distress, trembling and sticking close to a car.

"It was really horrific to see that little calf laying in the road," Natalie Kinzel said.

It is believed to be the same calf that another visitor packed into his SUV and took to a field office for help. The young bison was rejected by its herd and had to be put down.

The man in trouble for trying to help the calf has been identified as Shamash Kassam, who was issued a $135 citation for "disturbing wildlife." He told a wildlife officer that he feared it would be road kill and that it was staying close to his engine for warmth.

But the picture and the resulting tragedy exploded on social media, even sparking an online petition called "Justice for Baby Bison."

Yellowstone's own Facebook page now has 15,000 comments and counting, people outraged the bison was put down.

Park officials responded that they don't have the facilities to quarantine a young animal and check for disease, or to care for a bison that can't fend for itself.

It's illegal to interact with wildlife at Yellowstone, but that hasn't stopped visitors -- some of whom were seriously injured in just the last year -- from getting too close to take selfies.