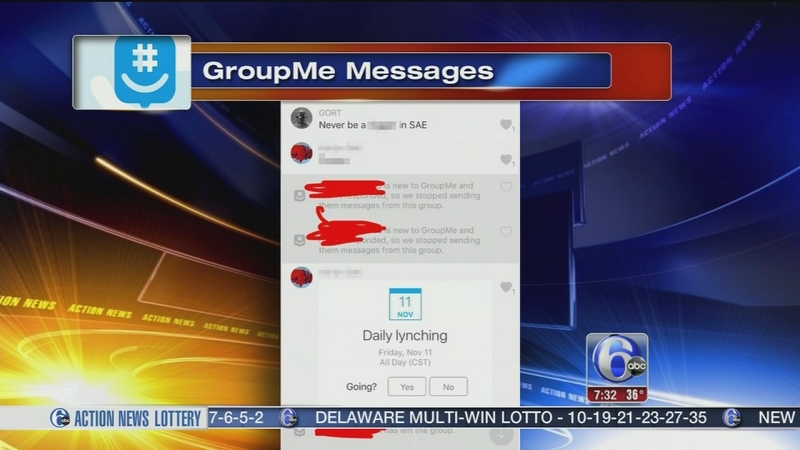 Administrators at Oklahoma say they have temporarily suspended that student as they continue to investigate the origin of the messages.

Penn students learned of the developments in an email from their school overnight, according to the Daily Pennsylvanian.

An update from the university:

An Update to the Penn Community on Racist Messages Directed at Penn Students⠀
⠀
We wanted … https://t.co/PK8O10cb18 pic.twitter.com/FgLNZCNISj

Word of the messages sent shock-waves through the campus. Nate Morris is one of those who found himself added to a racist Group Me account Friday. The messages on an account called Mud Men included racial slurs.

"I felt scared because I didn't know where this was coming from," said Morris, Penn freshman. "They made a calendar event saying that it's 'Lynch Day,' and they're going to try to find any black person they can lynch."

A number of black freshman students who were targeted gathered at a private meeting to discuss the incident. Outside hundreds marched through Penn's campus in protest. "I was absolutely shocked. This is one of the last places I'd expect something like that," said Shelley Thomas, Penn graduate student.

Some connected the incidents to the election. Another account called Trump's Disciples was created by a user named Daddy Trump.

"There was a message in there, it was 'Heil Trump,'" said Fawole.

In a statement, University President Amy Gurtman called the account repugnant and said, "We are both angry and saddened that it was directed to our students or to anyone. The people responsible for this are reprehensible. We have increased campus safety."

Gov. Tom Wolf weighed in on the incident on Twitter:

The racist events at @Penn & other PA schools are unacceptable. We will do everything we can to end & prevent these hateful incidents. - TW


"I condemn in the strongest possible terms the racist activity taking place at the University of Pennsylvania. Everyone is welcome in Philadelphia regardless of whether they are a freshman at one of our universities or if they've always called Philadelphia home. It is heartbreaking to see this type of activity here in the birthplace of our democracy and the city of brotherly love. I urge the Philadelphia Commission on Human Relations to investigate and hold all responsible parties accountable for this disgusting behavior."

Police are working to determine who created the accounts. Students feel this week's election has emboldened those with hateful thoughts.