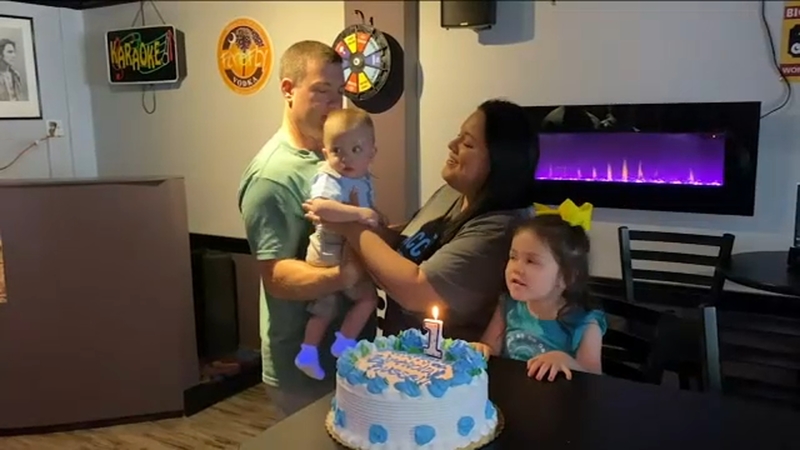 The drive was a welcome sight after the New York Blood Center announced a blood emergency last month due to an alarming drop in blood donations. The region's blood supply currently stands at a 2-3-day level, which is well below the ideal level of 5-7 days.

So while most people give presents, the McAuliffe family gave blood, as a way to give back to the community and ensure that there are life-saving blood donations available for anyone who may need it, like Stephanie McAuliffe.

The Staten Island mother developed a condition during her pregnancy called placenta accreta and placenta previa, which causes a dramatic increase in bleeding, and can even lead to death.

She needed six units of blood to replace what was lost when giving birth to her son Russell.

"Really just laying in that bed, and I saw my husband in NICU, I said I can't believe that I'm alive, it was always a fear of mine," Stephanie McAuliffe said.

But she has now turned that pain into purpose, holding a blood drive where at least 60 donors have signed up. The New York Blood Center says they are grateful.

"I would say that we are probably actually at 50%, but definitely not at 60 or 65%," said Chantal Mehu of the New York Blood Center.

The blood drive was held at Rab's Country Lanes and is the second blood drive that they have hosted.

"This is the second blood drive in the last year that we've hosted as a result of the pandemic and the shortages, so to be able to open our doors, have a space to do so, that's why we're here," said Frank Wilkinson of Rab's County Lanes.

As for the condition that Stephanie McAuliffe had, placenta accreta and placenta previa are serious conditions that can cause complications for the baby and mother. It's become more and more common. In fact, the cases have quadrupled since the 1980's, due to the increasing number of C-sections.

But Wednesday marked a celebration of both birth and survival, and was a way of gathering donors while larger companies still have fewer people at the office.

Stephanie McAuliffe's husband said his wife is a guiding light and a positive example at a time when it's needed the most.

The NYBC encourages all who are able to sign up and donate today.