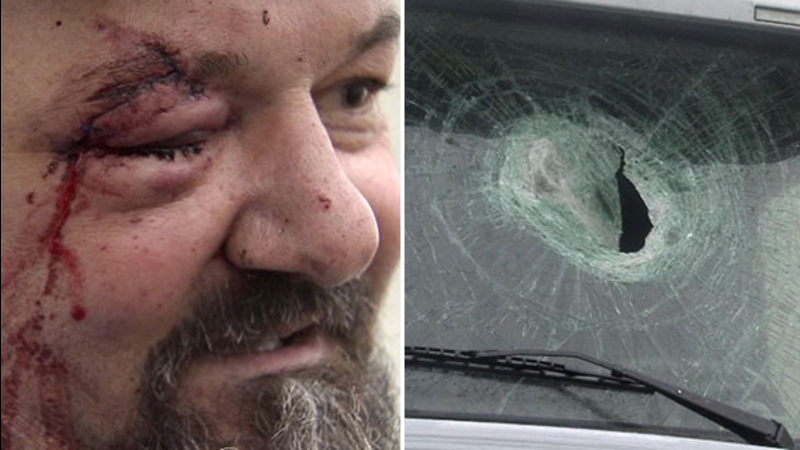 BRISTOL TWP., Pa. -- Police in Pennsylvania are looking for the person who sent one trucker to the hospital and put several others in danger.

They say the suspect was throwing bricks off an overpass into traffic on the Pennsylvania Turnpike, hitting three trucks Thursday night.

Action News met up with truck driver Randy Blake on his way back home to West Virginia. He was still in shock after a harrowing night.

Randy tells us, "That somebody could be that stupid to do something that heinous just for the kicks of it."

Randy was driving eastbound on the Pennsylvania Turnpike in Bristol Township around 6 p.m. when out of nowhere a brick came crashing through his windshield as he drove under Bristol Oxford Valley Road.

"Hit me in the head," Randy said. "I maintained control of the vehicle. Got off the exit. Actually drove all the way down and around to the Wawa."

Another driver called 911 when he saw Randy's face covered in blood. He ended up with 15 stitches, a broken eye socket and a fractured jaw. Randy's wife, Alicia, drove six hours to the hospital when she got the call.

Alicia Blake says she, "Immediately dropped everything. I've never driven up here before. It was 8:30 at night. I was scared to death."

State police say two other truck drivers had their windshields smashed by rocks and bricks around the same time. Those drivers were not hurt. To make matters worse - Randy says he was hauling flammable material.

Randy explains, "I could've lost my eye, I could've wrecked and not only killed me but killed hundreds of other people on the interstate."

He says while he won't stop driving - he's still hoping for an arrest.

"This is how we feed our families. And they're out there almost taking it away from us," he said.

Randy Blake will have to come back to Temple University Hospital in another week or two for surgery to repair his eye socket.