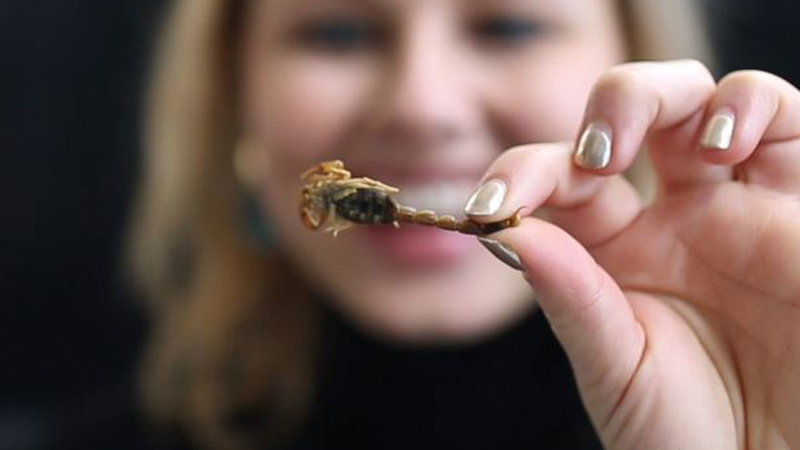 Yoon is the executive director and chef of Brooklyn Bugs, an organization that raises awareness and appreciation for edible insects. Brooklyn Bugs sees a future where people pack salt-and-vinegar crickets with their lunches or pair grasshoppers with their chardonnay - and it's totally normal.

"The perception is that insects are that creepy thing that live in your apartment," Yoon said. "What I'm trying to change and bring awareness to is that these insects are farmed and harvested for human consumption."

Yoon supports this mission of normalization by incorporating edible insects into gourmet meals. For example, he serves barramundi sea bass with pear, olive oil and wasps and tops pound cake with Adobo-flavored grasshoppers.

He also rallies chefs to cook with bugs and post beautifully plated pictures of them on Instagram. He wants edible insects to look like something that's meant to be eaten.

But why would Americans accept crickets as the new kale? Citing a 2013 report released by the United Nations, Yoon said edible insects have a multitude of benefits.

"It's very sustainable," Yoon said. "It takes a fraction of the water that it takes to produce the same amount of protein as traditional livestock like cow and pig."

Yoon fell into the proverbial wormhole of edible insect activism about a years ago. The New York native originally sought a career in music and spent 15 years running an artist management company.

Getting burnt out, he started to cook. Even though he was never formally trained, he was able to quit his music industry job and open a catering company, Yummy Eats, seven years ago.

One day, Miru Kim, an artist and friend, approached Yoon and asked for his help with a project called Phobia/Phagia - where she conquers her fear of bugs by eating them. That's when he started researching edible insects, and with the help of sponsors like Entomo Farms and Entosense, Brooklyn Bugs was born.

Yoon doesn't think the idea mixing bugs into the culinary mainstream is too far-fetched. He said it only requires a small shift in perceptions.

"If you think about lobster, it was considered poor people food. No one wanted to eat it," he said. "Look at it now. It's a luxury item."

For New Yorkers looking to take the dive, Brooklyn Bugs is holding several bug-tasting events, including Bugapalooza 2018 at Ripley's Believe It or Not in Times Square on March 31.