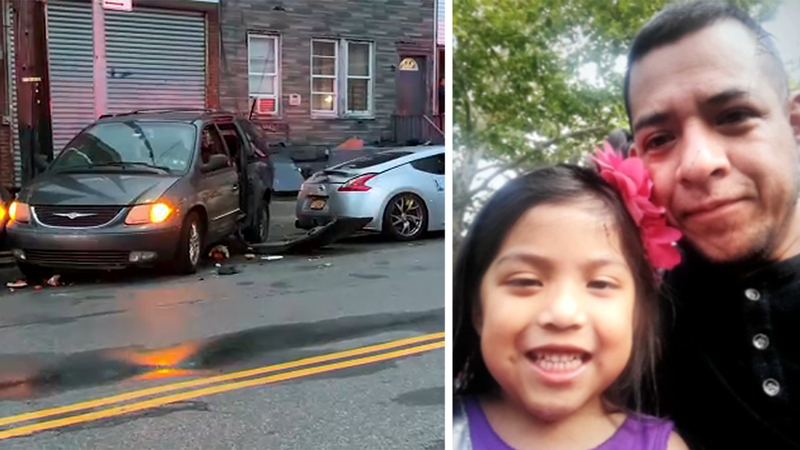 BOROUGH PARK, Brooklyn (WABC) -- A 21-year-old man is charged with manslaughter and other offenses after allegedly running down a man carrying groceries while his family watched in horror in Brooklyn last summer.

Jose Barrera was unloading bags from his vehicle outside his Borough Park home just before 8 p.m. on Saturday, July 11, when he was pinned by a car driven by Kareem Denton, who had lost control while allegedly speeding in a sports car with worn out tires and a forged inspection sticker.

Barrera had just walked his 6-year-old daughter from the minivan to the curb seconds before the collision. His wife, who was still in the passenger seat, suffered minor injuries.

"This horrific crash was no accident," Brooklyn District Attorney Eric Gonzalez said. "It was a preventable crime that stemmed from reckless behavior before and during the collision. The defendant chose to drive a car he knew was not safe, allegedly sped on wet road conditions and took the life of a hard-working father."

According to the investigation, Kenton was allegedly driving over 60 mph in a 25 mph zone on a wet road when he lost control of his Nissan 370Z.

It is alleged that Denton had dangerously worn out tires that likely contributed to the crash, and that he allegedly knew about them. A mechanic had warned him about the bald tires, according to the investigation.

Furthermore, the vehicle could not pass a New York State inspection, and a forged inspection sticker was affixed to its windshield.

His driver license was suspended, and he faces a maximum sentence of 15 years in prison if convicted of the top count.

"This is the first indictment obtained by my new Street Safety Bureau, which was created this summer to better address vehicular violence on our roadways," Gonzalez said. "It will continue to thoroughly investigate and prosecute dangerous drivers when their unlawful actions cause traffic fatalities or injuries. I am determined to get justice for victims and to send a message that this conduct will not be tolerated in Brooklyn."

The Street Safety Bureau was created last summer to assist in police investigations of traffic violence cases, with emphasis on protecting bicyclists and pedestrians, responding to scenes of serious collisions in real time and coordinating support services for victims and their families, among other duties.