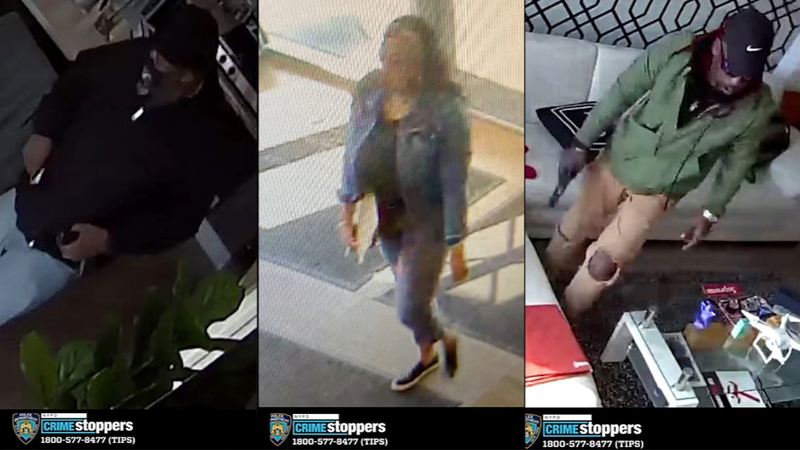 SHEEPSHEAD BAY, Brooklyn (WABC) -- The search is on for three people who robbed and shot a man in his Brooklyn apartment.

According to police, a woman came to the door of the 39-year-old man's apartment on Voorhies Avenue in Sheepshead Bay around 2 p.m. on Saturday and told the victim that he didn't pay his monthly dues.

When the victim opened the door, two men forced their way into the apartment with guns.

A struggle ensued and the victim was shot in the leg.

The men then tied the victim's wrist with zip ties and made off with $1,600 worth of property including a Rolex watch, and iPhone and numerous credit cards.

Police released photos of the suspects they are looking for.

The female suspect is described as 5'7'' with a full-figured build. She was last seen wearing a blue denim jacket, black shirt, blue jeans and black and white shoes.

The male suspects are both described as approximately 30 years old, 6'0'' tall and 200 pounds with a medium build.

Anyone with information in regard to this incident is asked to call the NYPD's Crime Stoppers Hotline at 1-800-577-TIPS (8477) or for Spanish, 1-888-57-PISTA (74782). The public can also submit their tips by logging onto the Crime Stoppers website at https://crimestoppers.nypdonline.org/ or on Twitter @NYPDTips. All calls are strictly confidential.