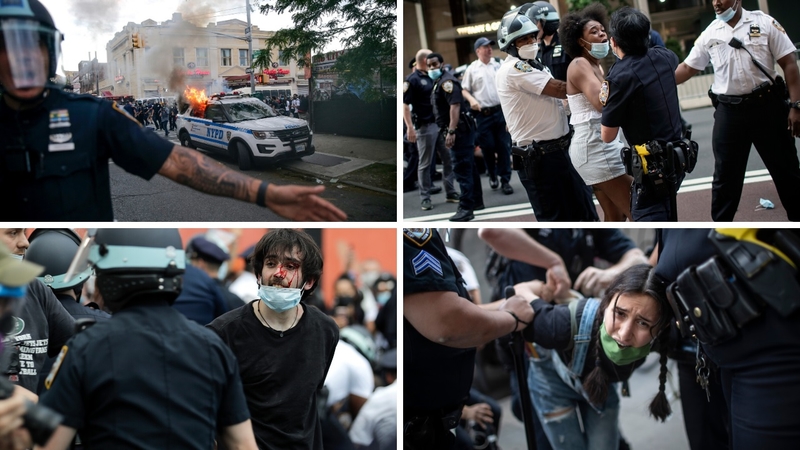 NEW YORK (WABC) -- The unrest from the deadly arrest of George Floyd in Minneapolis spilled unto the streets of New York City Friday night, convulsing the streets of Brooklyn, with "countless" officers hurt and more than 200 arrests reported.
EMBED More News Videos

NYPD vehicles were set on fire, windshields smashed, and officers were injured amid tense confrontations between police officers and protesters in multiple locations in the borough. The police commissioner said "countless' officers were still in emergency rooms Saturday being treated, and that it was fortunate none were killed.

Mayor Bill de Blasio Saturday said there would be an independent review of the protests and the police response, which has come under fire for itself being rough. One video shows an officer throwing a peaceful protester to the ground, the mayor said.

Later in the morning, Gov. Andrew Cuomo said state Attorney General Letitia James, an independently elected official, would conduct a quick, 30-day review and examine"'all actions and procedures" of police and the crowd's actions during the Brooklyn protests, saying the public deserves answers, while condemning the violence for obscuring "the righteousness of the message."

At the height of the demonstrations in Foley Square and outside Barclays Center there were more than 3,000 protesters, ABC News reported. The NYPD arrests included one person outside the 79 Precinct with loaded .380 semi-automatic pistol. Two sisters from the Catskills were arrested for allegedly throwing a Molotov cocktail at an NYPD van occupied by four officers.

Also at the 79th Precinct, protesters tried to breach and enter the precinct, but they were pushed back by police and some arrests were made. Outside Brooklyn's 88th Precinct, there was another clash as large crowds gathered with vehicles vandalized.

Thirty seven patrol cars were vandalized with graffiti and broken windows. A police van was set on fire, and a molotov cocktail was thrown into an occupied police car but the officers inside were unhurt.

NewsCopter 7 was over the scene in Union Square as a police cruiser went up in flames.

NewsCopter 7 was over a police cruiser set on fire in Union Square, as protests turned violent across NYC and the country.

There were more than a dozen officers injured, ranging from teeth knocked out to shoulder and head injuries.

There are a couple of encounters between police and protesters that the NYPD is reviewing.

De Blasio appealed for calm, and spoke of the "pervasive" pain of racism in New York at a news conference on Saturday while condemning violent acts by protesters.

De Blasio condemned aggressive police actions against peaceful protesters, and he pointed out that elected officials were pepper sprayed during the confrontations..

The mayor said he'd seen videos that do not reflect the values of the city, where protesters were handled roughly by police, and said the city will not accept that behavior.

The video of the woman being thrown to the ground was described as unacceptable by de Blasio, and he said there would be consequences. "It corrodes trust," he said.

But he said he saw actions from protesters who came with an agenda of violence and meant to attack police officers, vehicles and precincts. That is "purely unacceptable," de Blasio said.

"We cannot and will not allow " people who incite violence while acknowledging the right to peaceful protest.

The mayor also announced an independent review of the protests and the police response. "We need to get to the bottom of what happened," he said, adding there would be a quick effort to determine accountability.

"We can do better than this, and we must," Dermot Shea, the NYPD police commissioner, on the police's handling of the protests.

Shea said the answer for violence should not be violence or murder.

With more protests planned Saturday, Shea said the key goal would be to ensure safety.

Williams condemned the "wall of police" that greeted protesters. "It's an imposing position - dealing with people that are grieving and angry. The response to that cannot be a show of force that will not help us get through situation."

Added Williams: "We saw an officer throw and shove someone to the ground, she hit her head. That was unnecessary and there has to be answers."

Concerns about COVID-19 spread at protests

The mayor said he wished that protesters, in the middle of the COVID-19 pandemic, would choose another way to express themselves that doesn't involve mass gatherings.

But he expressed sympathy for why they gathered: "I understand why after not just years, not just decades but centuries of oppression that people at a certain point need to express themselves in the most powerful present way. Again always, always peacefully."

He continued: "So I understand it, but I would still wish that everyone realize that when people gather it's inherently dangerous in the context of this pandemic and I'm going to keep urging people not to use that approach. And if they do to focus on social distance and wearing face coverings."

Police officers armed with night sticks could be seen during protests that turned violent in Brooklyn on Friday night. (Credit: KarlMunstedt/Twitter)

On Friday, anger also spilled into the streets Friday in Lower Manhattan as protesters first gathered at Foley Square.

The demonstration shut down traffic in the area as the NYPD struggled to keep people on the sidewalk.

Dozens of protesters were arrested in NYC as they protested the death of George Floyd.

Gwen Carr, the mother of Eric Garner, was out with the protesters.

Her son was the Staten Island man who died after he was tightly restrained by police in 2014.

In her remarks to the crowd, Carr said she doesn't condone violence, but understands it.

"It's not an isolated incident," New York Governor Andrew Cuomo said. "It's a continuum of cases and situations that have been going on for decades and decades and decades. These are just chapters in a book. The title of the book is: 'Continuing Injustice and Inequality in America.'"

Jim Dolan has more on the protests that broke out in NYC following the violent arrest death of George Floyd.

Mayor Bill de Blasio is pleading for calm in the face of mounting frustration.

We have a long night ahead of us in Brooklyn. Our sole focus is deescalating this situation and getting people home safe. There will be a full review of what happened tonight. We don’t ever want to see another night like this.

RELATED: Photos from a night of protest and rage in New York City