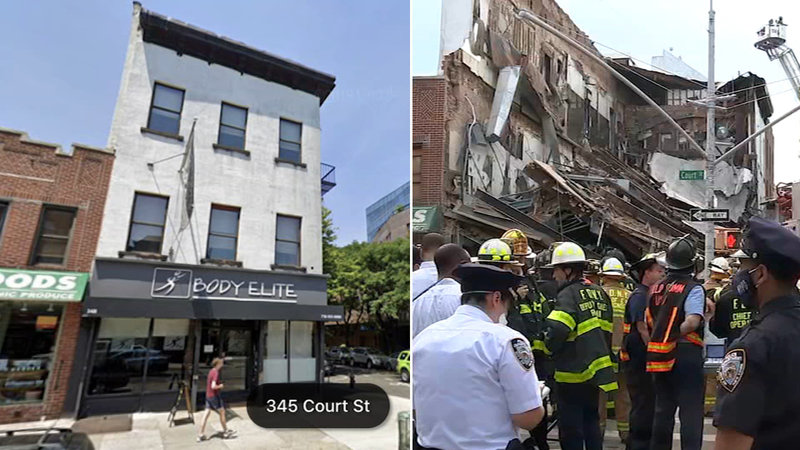 The FDNY says no major injuries were reported and everyone is accounted for following the incident in Carroll Gardens.

The collapse was reported at 338 Court St. just after 4:30 p.m. on Wednesday and sent debris into the street and onto several cars.

Video from NewsCopter 7 showed the extent of damage.

A partial stop work order had been issued for failure to maintain the building just weeks ago -- and the building appears to have been under construction at the time of the collapse.

"We do know that there were some issues with the facade, there was a bulge in the exterior wall, and that was one of the things they were here to get a stop work order because of the way they were performing the work," Deputy Commissioner of Enforcement of DOB Timothy Hogan said.

Witnesses say the entire collapse took about 30 seconds and immediately created a thick cloud of dust.

"I'm lucky to be alive," Bob Krissnand said. "All of a sudden I saw the building coming down and after that I don't know what happened. I ran and I couldn't see where I was going...I could have been run over by a car."

Jim Dolan has more on the 3-story building collapse in Brooklyn that left only one person with minor injuries.

The building housed a gym called Body Elite on the first floor.

In June, the gym posted a message on Facebook to its members that it was undergoing an exterior makeover while it was closed due to COVID-19.

The FDNY says all workers have been accounted for, but one person who was inside at the time did manage to escape from the second floor when the building collapsed.

That person got out on his own and walked away with only minor injuries.

Video posted to social media shows the immediate aftermath of the collapse:

The FDNY says there is no evidence of an explosion prior to the collapse.

FDNY members are operating on scene of a building collapse at 348 Court Street in Brooklyn. pic.twitter.com/zUs1BYKwq4

The Department of Buildings said it has issued an order for the full demolition of the remaining structure and a construction fence to be built around the property. A full vacate order was issued for the neighboring building until the site is safe.

The NYPD asked residents to avoid Court Street between Atlantic Avenue and 1st Place and Union Street from Henry Street to Smith Street.

The cause of the collapse remains under investigation.

Naveen Dhaliwal has more from the scene of a 3-story building collapse in Brooklyn.