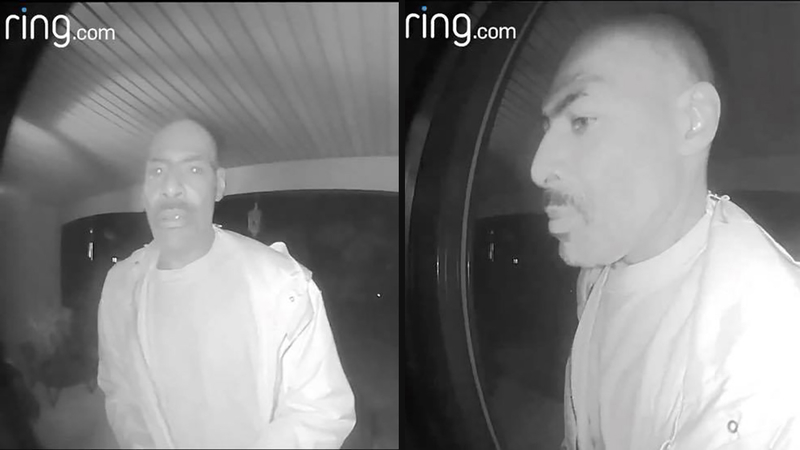 FRANKLIN TOWNSHIP, New Jersey (WABC) -- Police in one New Jersey town are investigating a string of burglaries and urging residents to be be cautious and vigilant.

Authorities are also looking into whether the suspect breaking into homes in Franklin Township could also be responsible for a rash of similar incidents in North Brunswick and other municipalities.

The Franklin Township Police Department released photos of the suspect that were captured by a Ring.com doorbell.

"According to the time stamp, it was 4:03 in the morning," homeowner Michael Wade said. "My wife and I were sleeping, and the dog started running around like he wanted to go out."

But then, Wade said his phone sent him an alarm saying someone was trying to open the door.

The images showed a man with gloves on, looking straight into the camera, before taking off seconds later. Wade called police and went downstairs.

"I could see the screens had been raised and looked like he tried to open the door," he said. "Scary."

Police Lieutenant Philip Rizzo said his department is investigating a few burglaries in the area that are similar, and they're working closely with other nearby towns..

"Many times we hear people say, 'I saw someone,' but it's two days later," Rizzo said. "Call if you see anything. Give us an opportunity to make contact with the suspect."

In the North Brunswick incidents, police say the man was entering occupied homes and burglarizing them while the residents were asleep.

The suspect got away with alcohol and car keys, even stealing several cars. In one incident, there were 11 people asleep inside at the time of the burglary.

The investigation is active and ongoing, anyone who notices any suspicious activity in Franklin Township is urged to call police at 732-873-2300.