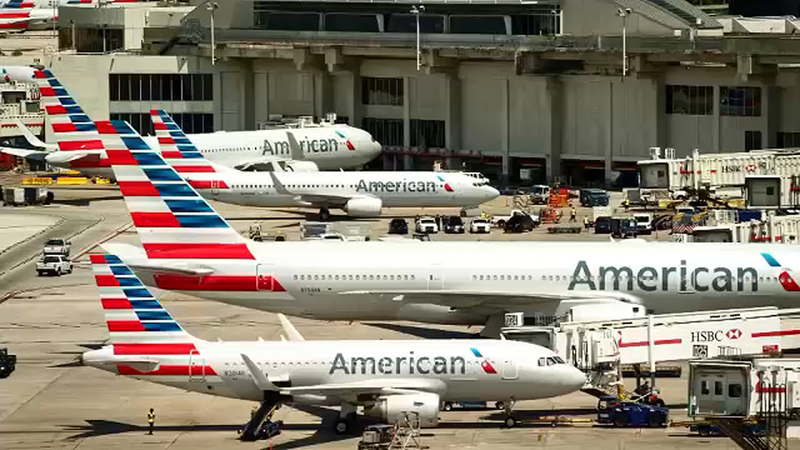 NEW YORK (WABC) -- A battle between American Airlines and its mechanics is heating up, and flyers are feeling the impact with hundreds of flights canceled in just the past ten days.

Now the airline has sued the mechanics union, claiming they are delaying planes.

Amid the dispute, people who fly the world's biggest airline are having a bumpy ride.

"You're getting to the airport and you don't know if your flight's gonna get out or not," said passenger John Martinez.

Frequent flyers like Martinez are getting fed up with American Airlines. With the busy summer season underway, flight cancellations and delays are out of control.

"It's frustrating," said passenger Scott Hicks. "I have to be somewhere tonight, now I'm gonna be late and I live on a very tight schedule."

The problem isn't weather or the grounding of two dozen 737 Max jets. Instead, it's an old-school union brawl.

The Transit Workers Union, which represents thousands of mechanics without a contract for more than three years, has been escalating its feud with American, which wants to outsource maintenance overseas.

"You are not gonna get what you want," said Samuelsen. "And if this erupts into the bloodiest, ugliest battle that the United States labor movement ever saw, that's what's gonna happen. You're already profitable enough."

American has filed suit against the union, alleging its members have been inventing maintenance problems to wreak havoc on schedules.

The airline told a judge that in just 23 days since last month, the airline logged 722 cancellations, inconveniencing more than 175,000 passengers. The company says the odds of that many real problems are less than one in a billion.

But as the two sides fight, it's the customers hanging in the balance and they are the ones who pay the bills.

"We fly because we want reliability and transparency," said Dennis Sparicino. "I'll fly another airline."

Next month both sides will appear in court, but not at the negotiating table.