The Village Voice ending print edition after more than 60 years 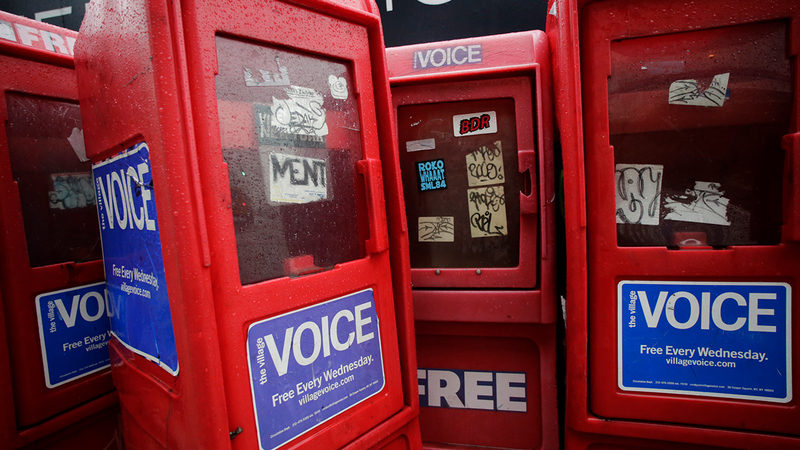 The Village Voice ending print edition after more than 60 years

GREENWICH VILLAGE, Manhattan (WABC) -- The Village Voice is ending its free weekly print edition to focus on its digital platform and a variety of new editorial initiatives.

Peter Barbey purchased the Voice in October 2015 from Voice Media Group in an effort to revitalize and reimagine the paper.

"That business has moved online - and so has the Voice's audience, which expects us to do what we do not just once a week, but every day, across a range of media, from words and pictures to podcasts, video, and even other forms of print publishing. This decision will allow us to move forward more freely in our pursuit of all of those avenues so that The Village Voice brand is not just once again viable, but vital," Barbey said.

The Voice also unveiled a newly redesigned website back in May.

In addition to moving forward, Barbey also said that he was exploring some new opportunities related to its 60 years of archives, which offer a veritable chronicle of America during the post-war period.

The Village Voice was the country's first alternative newsweekly, and has won multiple Pulitzer Prizes. It has been celebrated for its arts and culture coverage and its investigations.

The Village Voice will also continue to produce events such as The Obie Awards and The Pride Awards, an event launched during New York City Pride Week this past June to celebrate individuals and organizations that have worked to better the lives of those in LGBTQ communities and advance the cause of LGBTQ rights around the world.

The Village Voice was founded in 1955 by Dan Wolf, Ed Fancher and Norman Mailer, the latter of whom later said in an interview that in helping to create the Voice he wanted to make a "revolutionary" paper that would explore "the Village in all its fire."
Report a correction or typo
Related topics:
businessgreenwich villagenew york citynewspaper
Copyright © 2021 WABC-TV. All Rights Reserved.
More Videos
From CNN Newsource affiliates
TOP STORIES