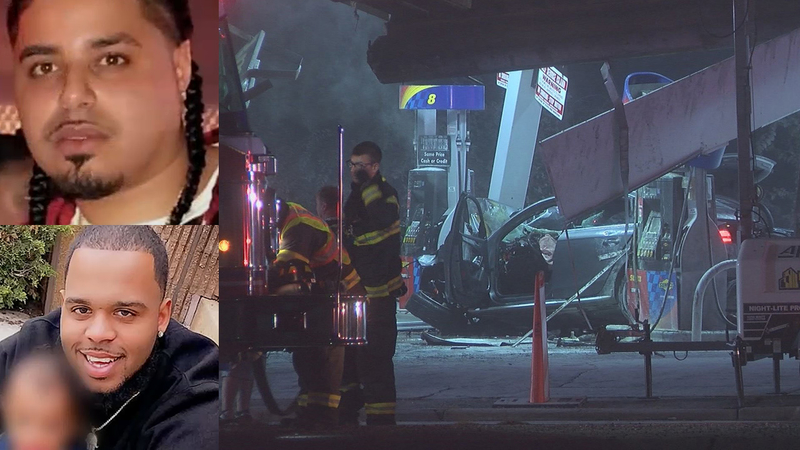 The incident happened at 2:10 a.m. at the Sunoco Gas Station on the corner of Veterans Memorial Highway and Jericho Turnpike in Commack.

The driver of the 2013 Audi, 27-year-old Hector Sanchez, Jr., and his passenger, 24-year-old Shawn Jenkins, Jr., became trapped in the vehicle, which caught fire when it crashed.

The Commack Fire Department responded to the scene and cut the men from the SUV, but both young fathers were pronounced dead at the scene.

"It's just so tragic," Jenkins' cousin Sasha Ruiz said. "He didn't deserve this. He was the best father ever."

Jenkins was the father of a nearly 2-year-old girl, while Sanchez had a 1-month-old daughter. They were both from Brentwood.

The steel structure above the gas pumps collapsed in the crash, the devastation so great that relatives who came to the scene were brought to tears.

"I was coming to see where my cousin's last moments were and pay some respects to him," Jenkins' cousin Chavon Fredericks said. "A loving, amazing person, that lived graciously on this earth."

Police are investigating, but they say there was a lot of fog in the area at the time.

Detectives are asking anyone with information about the crash to contact the Fourth Squad at 631-854-8452 or anonymously to Crime Stoppers at 800-220-TIPS.