Brooklyn woman slashed in face by stranger in Chelsea; No arrests made 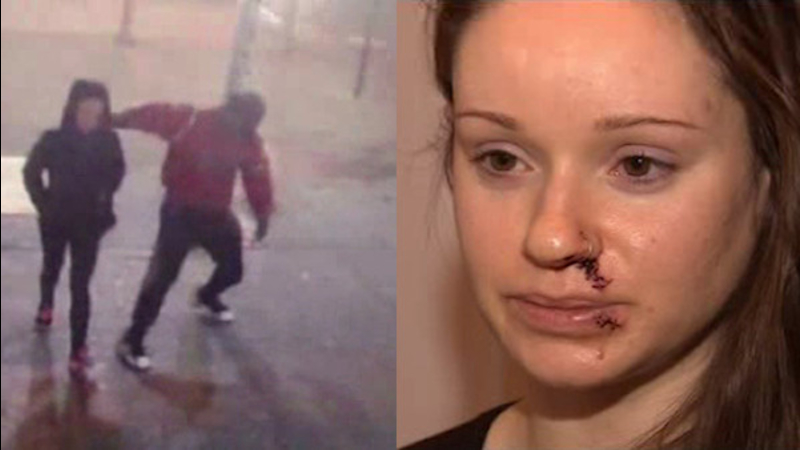 CHELSEA, New York (WABC) -- Police are searching for a man who slashed a 24-year-old Brooklyn woman in the face in a seemingly random attack in Chelsea early Wednesday morning.

The victim, Amanda, did not want to use her last name. She was walking to work at 5:50 a.m. on West 23rd Street at Seventh Avenue when she was approached by the suspect.

"He was kind of stumbling around," she said. "I could tell that he didn't really have anywhere he was going specifically. He was just kind of out there, waiting for something. I guess waiting for me."

Out of nowhere, the man slashed her on the left side of her face and then fled the scene.

"I went to turn around and look at him, and he had already turned away," she said. "I never once saw his face. I saw his hand hit me, and that was it."

NEW: THIS is the man #Nypd is looking for. Slashed lady in the face without warning, @ABC7NY #Chelsea pic.twitter.com/uADa5T3Ohl

"I walked past him, and then something hit me in the face," she said. "And I thought maybe he punched me, and I thought maybe I broke my nose, because I felt blood. And then, when I went into the diner, I told them, 'I'm bleeding, please help me.' And they're like, 'Oh my God, you have a big cut on your face.' I'm like, 'What? I thought I broke my nose.' I didn't know what was going on.

The woman was taken to Bellevue Hospital, where she received seven stitches on her face.

Now, she is swollen and sore with a huge gash above and below her lip.

"I just have a bit of a headache," she said. " I feel like I got hit in the head with a baseball."

Amanda says she does not know the man, has never seen him before and never said a word to him.

"I don't know what I did to deserve that," she said. "I guess I was in the wrong place at the wrong time.

The suspect is described as being in his mid 20s to early 30s, between 5-foot-7 and 5-foot-10. He was wearing a red jacket, possibly with NBA lettering, a green sweatshirt and black pants.